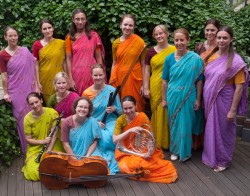 Seems this site has lain neglected for a whole year now, while I’ve been writing elsewhere. Rather than a tedious round-up or a list of more specific apologies, I thought I’d highlight a favourite event of the last twelve months: singing Sri Chinmoy’s music in Norway and Iceland, with Temple-Song-Hearts. 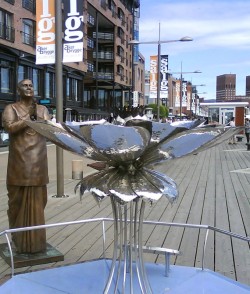 It was my first time in either country. Oslo gave a chance to visit the Eternal Peace Flame and the statue of Sri Chinmoy that I had only seen in photographs (even though I designed its website a couple of years ago). There was also an opportunity to visit both branches of The Fragrance of the Heart (whose website I also had the honour of making a while back too!). Both cafés are far more divine and uplifting than their virtual counterparts, and the photographs of the coffee do it no justice at all. 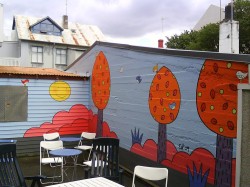 Bizarrely, I was homesick for Iceland when I came back home. There was an otherworldly beauty and freshness that far north, an intimacy with nature, and an unbridled sense of hospitality. We were spoiled with attention and comestibles, from the minute we stepped out of baggage claim. No sooner had we entered the lunar landscape outside than we were welcomed to the cosy restaurant run by students of Sri Chinmoy: Ecstasy’s Heart-Garden (which… doesn’t have a website). Roving ceramicist and barista, Vilas Ed Silverton, has painted this glorious childlike mural outside. (He has a very nice website… but it’s not one of mine). 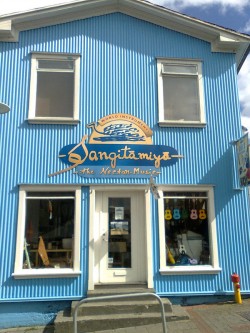 Then just down the road is Sangitamiya, Reykjavik’s own World Music Shop. Although I’ll probably never be considered an instrumentalist, I was keen to visit, having just finished making Sangitamiya.is! I love the way the buildings are usually made of corrugated metal, then painted in a festival of colours – often with more fantastical murals on the side. This one stands alone on one of the main shopping streets – always sky blue, even when the skies are cardboard-grey. 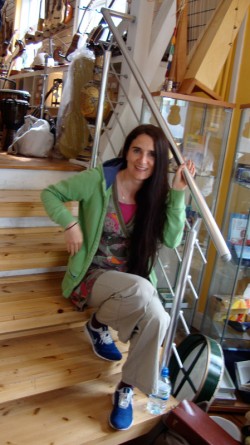 Pictures cannot conjure up the sounds inside that shop by any means; it’s a playground for the ears! One simply cannot worry in such a place… or even think at all. Somehow after listening for a while, the Bagpipes seem to blend fine with the Ukelele, and that with Harp, then they all join the assortment of percussive experiments. I’m happy just to hear them, and to look at their shapes. 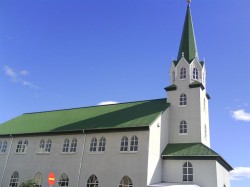 Our concert was at the Fríkirkjan – a gorgeously simple corrugated church overlooking the Tjörnin lake. Not the ancient, chilly sort of church, but a sort I had never witnessed – one flooded with natural light and a general air of joy. It was a happy and holy place – lovely to sing into – and filled pretty much to capacity for the concert, with around 150 people. 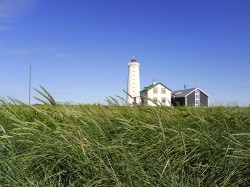 I suppose we were only there for 24 hours, but as it was July, it didn’t get dark, so it felt like longer. There was just time for some sightseeing, and a trip to the Blue Lagoon on the way to the airport: a natural spring of earth-warmed water, rich in therapeutic minerals. Our visit was enhanced by accidentally (I promise!) using the VIP changing rooms, when we had only paid the normal rate. We only realised our serendipitous mistake when comparing notes with other friends who had gone at a later time, and who reported a scene of din and clamour with as much personal space as one might find in a supermarket queue. We did wonder why we had to climb over a red chain on the way out that had not been there on our way in. Despite our misdemeanour (or perhaps partly because of it), a week’s worth of refreshment and rejuvenation had somehow been squeezed into those last 2 hours, and more than a lifetime’s geothermal silica. Iceland was that beautiful, even I was able to take a decent photograph along the way!

Nice post Sumangali, you’ve made me travel-sick for Iceland!