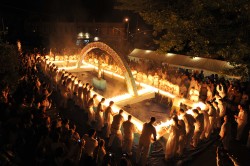 Most people would have to wait until their 48,000th birthday to have this many candles on their cake, but not spiritual teacher Sri Chinmoy.

Sri Chinmoy, who passed away last October, advocated self-transcendence — going beyond one’s own perceived boundaries in any field, competing with oneself rather than with others for self-improvement. This latest record by Ashrita and friends is literally a glowing example of such a philosophy! 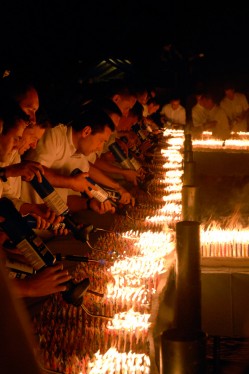 On the 27th of August an international team of 200, led by Ashrita, spent many hours counting and placing 48,523 candles on the 52 x 17 foot cake. Near midnight 80 assistants lined up around the cake with blow torches, knowing they had a span of only 2 minutes to ensure all their candles were alight simultaneously.

I was fortunate enough to be standing only a few feet away in the intense heat and electrifying atmosphere. Multi-coloured wax poured off the cake in strange rivers under the table, and I realised only then how fine the timing was.

The assistants had a large and dense rectangle of candles each to light, as they could not feasibly stand closer to one another whilst wielding blow torches. As they started near the centre of the cake and worked steadily towards themselves on the outside of it, the lit candles melted rapidly. The first would burn out soon after the last ones were lit, so the window of time in which the world record could be claimed was very slim.

Not only did they need a steady hand and nerves of steel, but a decent pair of lungs; as the whoops of success went up, each assistant had the job of blowing out all of his own candles! (I hope they remembered to make a wish.)

At the height of this spectacle, strings of sparklers went off along the back of a huge arch adorned with pictures of a smiling Sri Chinmoy. Meanwhile the audience of around 1100 sang “Happy Birthday”.

Ha! I remember this well. It was exhilarating and terrifying at the same time.
Most memorable of all was the moment when, having failed to blow out the candles with lung-power alone, a second squad of boys with fire extinguishers moved in to finish the job sending a massive fire ball high into the air above the cake.
A never-to-be-forgotten spectacle.

It’s definitely one of those things that stays in the memory really clearly, but also somehow didn’t even seem real at the time! I think that’s the way with a lot of Ashrita’s records, they’re so beyond the realms of the possibilities we’re used to, they’re hard to process even when you’re right there witnessing them. It was amazing to see this one and to feel the intense heat, to smell the melting wax and to watch it running away in rivers. And to see the intense concentration on everyone’s faces, knowing they had it under control but also being a little bit scared knowing also it had never been done before! I wonder what will be next…

What a neat story. Sounds like he was an incredible person. Interesting pictures too. Never would have thought of seeing that many candles in one place.

Amazing photos and I am sure that had some good planning that went in to it.

Thats amazing, I can only imagine the amount of heat that is putting off! I would hate to be the guy that has to blow them all out when its over. You’d hyperventilate before you got 1/4 of the way done.

I have never seen so many candles lit up in one place, especially on a cake. Most i’v seen is probably 25, which is not even worth mentioning.

Looks like this was a really beautiful event, I wish I could have been there.

Wow! As Eddie Murphy would say “Now that’s a Fire!” Thanks for the Article and Pics

wow that is an amazing sight.
you are definitely lucky to be there,
and apart of a guiness world record.
next time that will happen with so many candles,
will be a VERY long time, if not never.

Thanks for the pictures (and story)!