I was brought up as an atheist, so it may count as rebellion that I went to church today: a Sunday… perhaps… until you hear I went as a tourist.

I am not an atheist, far from it. I must get that straight. Straight away. I never have been. I am not a Christian either. My path is the path of meditation. My spiritual teacher Sri Chinmoy believes in embracing all sincere religions and other spiritual paths as paths to one God. This is something I have always felt in my heart as true.

I know surprisingly little about Christianity for someone who was born and brought up in a Christian country. It is as if I tried to read Christ’s Words but they are in a language I do not know… yet I feel them in my heart as good and true.

So I entered my local church today, overwhelmed like a foreigner, yet somehow at home. York Minster is very big, and very old; too big and old for my mind to comprehend, thus to express or even appreciate. For a thousand years York has been a site of pilgrimage as spiritual capital of the north of England; her Minster at once the reason for and the result of her wealth.

Many times I wanted to stand back and take some perspective, but it seems the architects made sure I could not, almost as if to remind me that God cannot be captured in the span of my eyes. Caught in the cross-fire of flash photography, I wanted to be there alone so as to grasp it all in silence, but that would almost be more daunting a task. 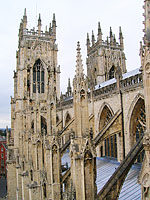 I decide to start at the top, perhaps thinking the vigorous exercise of climbing 275 steps will bring me some focus. On the contrary, dizzy from turning in a spiral and testing my lungs beyond their usual scope, I take my eyes from the steps to note that carving graffiti is not only a modern sport. I try to find the earliest date. Lost somewhere in the 1600s I return my full attention to the task of placing my feet on ever-narrowing stairs, since a tumble in such a place could be quite inconvenient. 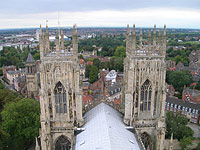 There is something in the human instinct which makes one look for familiar places when reaching a height. Perhaps the thought of seeing my house was embedded in my desire to climb in the first place. Some Italians seem to be hoping for a glimpse of their hotel, while I follow the city walls out of comfortable sight to wonder which brown dot is my own.

Someone is practising the pipe organ as we descend, and I want so much to hear it closely. One can only go so fast on such a precarious route though, especially with legs still jellified from the upward climb. I am disappointed when I find the instrument; not by its commendable beauty, and not by the player, even though he makes and polishes many mistakes, but the sound is damped, so I cannot drown in it as I had hoped, even when standing directly underneath. 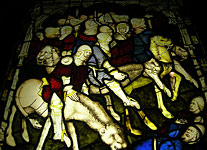 I try to avoid treading on the worn names of many distinguished gentlemen long-deceased, but there are so many set into the ground. I imagine them shifting uneasily beneath and tutting under their breath through hundreds of years. I am looking for a happy face in stone, but all are solemnly in prayer, unless they are one of a hundred gargoyles, whose job is not to smile.

St Peter stands forever on a little plinth holding outsized keys. He looks weary from the responsibility of his job. The face is so endearing I think to comfort him, but remember I am nobody to do so, and the image of him only stone. One has no face at all, a boy in grey marble, the body a likeness of one who fell too early some time in the 1300s. Was there a face? Was it worn away by the weight of a mother’s grieving caress, or did the mason fall early too? Some seem at the unflattering mercy of unskilled craftsmen, but I suppose tools were brutish in those days, so could bring only vague refinement in any hands. 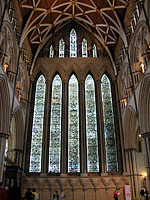 Glass painting was clearly easier. I stare long at many windows, great beauteous works of art. Circa 1260? Such devoted intricacy, all in greys and greens, a murky yet mesmeric light gazing back at me through time. 1422? Such delicate lines, yet such strange faces have endured so long the same expression.

But where is God? He is not on the coloured map in 6 folds that the ticket man gave me at the entrance so I’m not sure where to look. I thought I saw a lady talking to Him as she sat alone, until I saw her bluetooth headset. I used to come here in my youth when something troubled me, hoping God would hear out my grievances. I always felt better for sitting in this majesty. It made my problems seem smaller. I sit and listen for Him this time, assuming He must have grown tired of listening to me here. It is too big for me though, too grand, too old, too daunting. I open a book of hymns but there the foreign language speaks again. I follow the pattern of the notes for a while and head for home.

For me God is in my little white room at home. We listen to each other there. I am sad at my failing to truly appreciate the grand and ancient place of pilgrimage on my doorstep, but then remember it is just not my path to tread. I crane my head through the window and smile at her from afar, picking out one face of the tower that I climbed. I can love her all the same, even though I cannot understand her language. I am glad and grateful she is there.

I wonder whether to be sad that an entrance fee is necessary these days; that wealth comes to the city through tourism rather than worship. I decide not to see that as a sign of declining spirituality in our time, as that is too dreadful a thought, but instead that people are choosing to look for God inside themselves at home. I hope it’s true.

“God has an easy access
To every place,
Specially to our heart-temple.”

4 replies on “A Foreign Tourist At Home: York Minster”

Couldnt agree with you more on this. I think I would look for god in myself first and then every little thing around myself. Its really a great thing to realize god within yourself and every little particle.

[…] A foreign Tourist at Home: York Minster at Sumangali.org […]

Thank you so much for your thoughts, Sharani. For me it is definitely the case, but we each have our own path to tread. Maybe, it’s also that times are changing, and God in His Game of hide-and-seek changes His Hiding-Place 🙂

Hi Sumangali,
You offer a compelling perspective of finding the sacred in the small and ordinary as much or more than in the majestic and intended hymns to God. I sometimes wonder if there is an intended paradox that cloisters the sacred in a cloak of privacy and simplicity. Such a practice would hollow out the rock and give God space to lead the way. Maybe our more showy offerings – such as an enormous cathedral – divert attention away into human doings and beings more than they channel it into real immersion in God.