By Sumangali on August 5, 2012 in Sri Chinmoy Centre 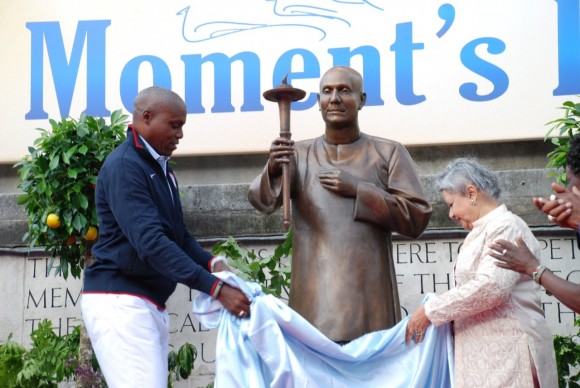 I was extremely fortunate to be part of an event entitled “A Moment’s Peace” on July 28th. Renowned Olympians, peace leaders, artists and musicians came together in London to celebrate the Olympic spirit of peace and universal friendship.

Nine-time Olympic gold medalist Carl Lewis highlighted the event by unveiling the “World Peace Dreamer” statue, a bronze sculpture of Sri Chinmoy holding an Olympic-style peace torch, which will be offered as a gift to the City of London. “This statue will remind us of the highest ideals of the Olympic Games – peace and friendship between all nations,” Carl Lewis said. “Sri Chinmoy was my mentor for more than thirty years, and the most peaceful person I have ever known.”

Joining Carl Lewis on stage were fellow Olympians Tegla Loroupe — former marathon world record holder — and Bob Beamon, CEO of Art of the Olympians, whose Olympic long jump record 44 years ago remains unbroken. “This statue embodies the same spirit of oneness, brotherhood and friendship which has infused the origins and traditions of the Olympics, both ancient and modern, and which to this day gives the Games their unique appeal,” Tegla Loroupe said.

I was so touched by the speeches of these illustrious guests. They each offered views and ideals that were personal and full of personality, but each with a similar profundity. What struck me most was their courage to remain hopeful in a world that does not always dare to believe in the ideals of peace. There was an all-pervading sense of brightness, a dignified light-heartedness and wide-reaching unity.

Archbishop Desmond Tutu could not be present, but had recorded a beautiful and heart-warming speech which was shown on a huge video screen. His daughter, Reverend Mpho Tutu, was present and spoke beautifully. She noted that the event gave the next generation the opportunity to step forward – it was as though a torch was being handed on. It seemed just so, as other daughters were there to represent many pioneering luminaries: Dr. Bernice A. King, daughter of Martin Luther King; respected philanthropist Khaliah Ali, daughter of Muhammad Ali; Marlene Owens-Rankin, daughter of Jesse Owens and managing director of the Jesse Owens Foundation. Also present, and entirely captivating, were Sibongile Mkhabela – CEO of Nelson Mandela’s Children’s Fund, Portuguese Paralympian Jorge Pina and former President of the General Conference of UNESCO, Dr. Davidson Hepburn.

The event was organised by the World Harmony Run, and hosted by Cathy Oerter’s Art of the Olympians (AOTO), founded by four-time Olympic discus champion Al Oerter, to help Olympians promote the highest ideals of humanity through their creative talents. In that vein, the ceremony was followed by a performance by Boris Puroshottama Grebenshikov, who offered a specially written song with the London Choir. Then the “World Harmony Art Exhibition,” featuring paintings by Sri Chinmoy, opened at the University College London. The exhibition was like a world in itself, I cannot remember ever seeing so many original artworks by Sri Chinmoy.

It is hard to put into words how powerfully uplifting this event was. For me one of the highlights was being able to perform a song by Sri Chinmoy during the ceremony, which seems to perfectly sum up the spirit of day.

A moment’s truth
Can and shall make the world beautiful.

A moment’s peace
Can and shall save the world.

A moment’s love
Can and shall make the world perfect.” 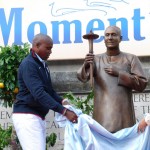 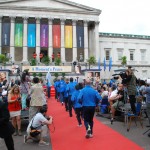 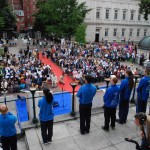 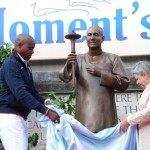 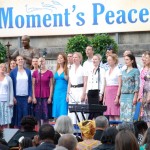 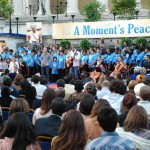 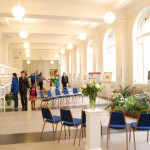 5 Responses to A Moment’s Peace

“The book is beautifully written and well-crafted.... It gives a rare insight into the fascinating, conflicted life of a very modern spiritual seeker.... It is an extraordinary tale and highly recommended.”