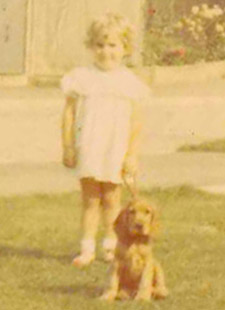 Dogs were my first obsession, and from the time I could talk, I repeated an ardent desire to have one of my own. In the innocence of youth, my parents decided to grant my wish just before my brother was born. They soon discovered it was not their greatest plan, but I was euphoric almost to the point of madness.

Spaniels themselves are mad at the best of times, at least when nobody has time to train them. Left to instinct they revert to a state of random ebullience, as if their brains are full of sherbet and their bodies made of slack elastic. They are free from cares or aversions, remaining cheerful while their ears are sucked and their eyes prodded. Whether ridden bareback by a lopsided infant or locked in the laundry room by a haggard mistress, they are simply glad to exist. Mine was no exception, and we were instant friends. The lawn soon grew small craters and an air of carefree wildness. The flowerbeds were troves of half-eaten, half-buried wellingtons and other rubber treasures. Anything made of anything so flimsy as paper or fabric, anything so delicious as a crayon or an electric cable, either had to move fast or be hidden above snout level.

My secret tears often fell on the ears of that dog. When I was sent to my room for being naughty, she would come with me, head and tail hanging low. Although she was of a skittish breed, almost brainless, and later even epileptic, she dissolved into a mute stillness whenever I was sad. The same eyes that told only greed and vandalism in everyday life then offered a pathos more genuine than most humans could muster. As if I had bared my heart to her in verbal detail, she understood immediately: not what had taken place, but how to heal it with her warmth and attention.

I still have a thing about dogs. Such a thing that I could probably never have one of my own now, as I would never get anything done.

6 replies on “An Early Friendship”

Sooo cute! See a spaniel would have been a great choice.
We had one too when we lived in Sri Lanka!
What a dog, definitely not the sharpest tool in the shed
but definitely the sweetest!
Ours even had puppies, I was a thrilled little girl.
My parents not so much though.
It was a sad day when we had to leave her behind and move back here.

Hello Bandhavi! You had a spaniel too? I’m not sure whether to be envious or alarmed she had puppies. I can imagine how thrilled your parents must have been – diametrically opposite to how thrilled a little Bandhavi would have been! I should tell my folks how lucky they were I was satisfied with one spaniel. Not sure they’ll be convinced 😉

Such a sweet article. Makes me nostalgic for my late mad spaniel and his habit of sitting on my newspaper while I was trying to read it and putting his paw politely but firmly on my shoulder if I should dare to stop stroking him. Randomly ebullient and sherbet-brained: you describe them so perfectly!

Ha! That conjures up a very funny picture, Bhashini. I can’t imagine anything more distracting while trying to read the news than a spaniel sitting in the middle of it. They are completely irresistible, and they know it.

That photo looks particularly angelic; I wonder what a picture taken 30 minutes later would have revealed? Maybe your parents comforted themselves with images like that when they found their lawn full of craters or their sofa cushions shredded!

We never had dogs but I am especially fond of them too. Whenever I see them on the street I smile at them, often forgetting to look at the owner. Your mention of electric cabling reminds me of a very smart sheepdog puppy I once knew who also loved to chew wire. Her very favourite thing was the telephone. Whole metres of chewed cabling would be found stashed under the blankets in her den and the phone would constantly be found off the hook, but the incident that made them give up buying new cabling and move the phone out of her immediate vicinity was something usually only managed by children. They came home late one night to find several policemen trying to break down their front door and more trying to get in through the back garden. Apparently the emergency services had received a call linked to their address, but the caller was apparently so ill, or in such distress, that only their ragged breathing could be heard before the line went dead. You can imagine how thrilled they all were when they got into the sitting room and found the dog asleep next to the mauled telephone…

Thanks for the priceless story, Hita! I rest my case, dogs really do take over areas of the home and life in general which are best left in tact. And whatever they do, they know we can’t be genuinely cross with them, at least not for long. Every breed comes with its own built-in “who me?” expression to be worn in such situations, melting any human heart.

Yes that photo does look suspiciously idyllic. I think that was the day we got her, so she was possibly still deciding what to shred first, overwhelmed with the choice. My shoes probably caught the brunt of it ten seconds after that shot, or maybe yonder rose garden, which looks a tad too perfect. As for me, having been so audacious as to get my own way at such an age, I jolly well ought to have been angelic, at least for the first day… or at least for the photo shoot. To think that was nearly forty years ago and I still go soppy at the sight of a cocker spaniel. Hopeless. Incurable.