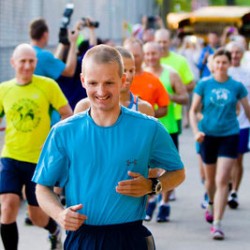 On July 24th 2015, Ashprihanal Aalto completed the Self-Transcendence 3100-Mile Race in 40 days, 9 hours and 6 minutes. That’s an average of around 76 miles a day for 40 days straight, on a concrete pavement in Queens, New York.

Ashprihanal, 44, from Finland, completed the race for the 13th time. Though he’s won the race several times, he has never held the course record. He finished 23 hours and 10 minutes ahead of the record held by Madhupran Wolfgang Schwerk from Germany. He gives all credit to the founder of the race – his Guru, Sri Chinmoy. 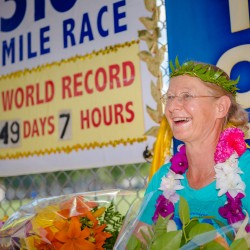 On August 2nd Surasa Mairer, 56, from Austria, broke Suprabha Beckjord’s 17-year record. Her time was 49 days, 7 hours and 52 minutes, averaging around 63 miles per day. This is the 3rd time she has run the race.

This year there are two female runners, but for many years Suprabha was the only woman to participate. Like Ashprihanal, Suprabha has also completed the race 13 times.

You can find out more about the race, and also see a beautiful documentary about Suprabha by Jessie Beers-Altman, called Spirit of a Runner at 3100.srichinmoyraces.org.

Wow! What an incredible achievement!
Hats off to Ashprihanal 🙂