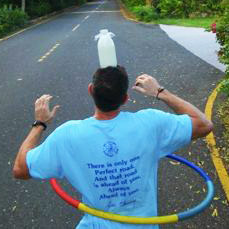 Ashrita Furman has been in the UK news quite a bit this week, leading up to his next record breaking attempt in Brazil: to jump rope 900 times in an hour. Underwater. In an aquarium tank. Full of manatees.

Ashrita currently holds 137 Guinness World records, including the one for holding the most world records. He attributes his achievements to Sri Chinmoy, having learned from him the art of meditation and the philosophy of self-transcendence since his teens.

My favourite article this week was by Will Pavia in the Times. Here is a short excerpt:

“It’s about getting closer to God,” he said. And what does God make of a man gyrating down a running track with a milk bottle on his head?
“I think He gets a good chuckle out of it,” Mr Furman said.

4 replies on “Ashrita Furman in the News”

What a guy wonder what we will see him do next! HE IS JUST HAVING FUN! I love that he is doing so much and it is all just him being a big kid. I say awesome job keep it up!

Thanks for your visit, Scentsy! Glad you found the story interesting and inspiring. Yes, having fun would seem to be a major factor 🙂

Oh my God, what will he do next? Juggling underwater in a tank full of sharks; pogo-sticking up Mount Fuji; receiving a police caution for cutting apples midair with a Samurai sword on the sidewalk in Queens, New York (“Okay, let’s take this nice and slow and no one will get hurt. Put the sword on the ground and back away.”); forward rolls, backward rolls, hopping, skipping, running on stilts… I bet if someone had told him when he was little that he would be allowed to do all this as an adult, he wouldn’t have believed them.

Go to Ashrita’s website and watch him; he really is in his own class…

Btw: For those that don’t know, Manatees are more commonly called ‘Sea Cows’; they are averagely 2.8-3.0 metres long and 400-500 kilograms, although they can be as long as 3.6 metres and weigh as much as 1,775 kilograms! So, quite distracting to a would-be underwater rope jumper, but as they are herbivorous they are not as dangerous as the sharks…

Thanks so much for the manatee facts, Hita! I wonder what they made of the visitor in their midst, I guess we’ll find out soon. A day in the life of a manatee in captivity… I imagine that’s usually less than captivating. They were probably glad of a little entertainment, especially from a fellow vegetarian 🙂