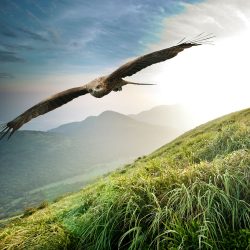 Significant bridges and viaducts; museums of working models, cogs and pistons exposed like metal bones in a butcher’s window; farming implements, rusted, resting from centuries’ use. Feature railways, a scent of coal smoke, low-pitched whistles of a locomotive, sweet-sour orange dripping from iced lollies. Air-shows with echoing tannoys, piercing rumbles in my feet, ears and chest, odours of jet fuel and fried onions from burger stands, pink candy-floss sticky on my cheeks and fingers.

With a family of engineers, such days out were commonplace, and I never thought to question them. Though I may have understood very little of what I saw, the memories are all in sunshine and include sugar treats, so in a child’s mind they are happy ones. The enthusiasm of parents and grandparents was itself transferrable as joy. I’m left even now with a fondness for steam trains and synchronised aircraft displays.

Last summer we sat on the family lawn, waiting for the Red Arrows to pass across some distant field en route to a show – not with their signature smoke trails, but no doubt in the perfect diamond formation I’ve seen countless times, above northern airfields or southern oceans, since I can remember. True, those nine pilots are trained killers – or defenders one might say – so let us not gild them, but the discipline and oneness of their flight would leave anyone gaping skywards in admiration. Ambassadors of the Royal Air Force, they are as quintessentially British as lawn bowls and high tea.

Soon it was clear they would not fly our way. Visiting relations went home a little disappointed – as I was, in truth – but there’s always another chance. The Red Arrows had already existed my whole life, so I had no reason to doubt their immortality. I left next morning for Scotland on a weekend with the Sri Chinmoy Centre. As the train passed my favourite stretch of coast near Berwick, a fellow traveller leaned suddenly into the aisle, gaping skywards.

And there they were, mid-way through a show. Our vehicle was woven into their display, like an unexpected dancer on-stage. Plumes of red, white and blue enveloped the train. A battle cry of jet engines split the air, as one tracked us to the left, another to the right, then switching above us while others improvised in the distance. Never had I seen them so close. Twenty seconds and they were gone, leaving our carriage whipped up in excitement, and with a sudden friendship amongst its passengers.

Sri Chinmoy’s spiritual path is not one of outer renunciation – the very title ‘Sri’ differs from ‘Swami’ in this sense. His teachings focus more on inner renunciation. Rather than letting go all earthly facets of life, instead ours is to let go our attachment to them. Often I find myself not simply encouraged, but almost compensated for this effort, as even the smallest of my desires are fulfilled – sometimes when they are all but forgotten. On countless days, going about my usual routines, I’ve seen a certain magic happen for myself and those around me – a synchronicity, a sure blessing, timed and measured almost too perfectly to believe.

Perhaps it comes as a package with engineering DNA, but I’ve always been a morning person. For me a penance is not waking at dawn, but rather staying up past bedtime. A 5:13 alarm heralds my morning practice, seven days a week. I shower, read Sri Chinmoy’s books, meditate, repeat a few daily songs and prayers, stretch my sleep-bound muscles into a few yoga postures. Often I walk before breakfast when it’s light enough, learning new songs as I go. Sri Chinmoy prescribes running – at least two miles if one is able – but walking is a good deal better than nothing. I march along a country lane between the fields of arable, as the sun awakes and ignites the sky behind me.

I see trained killers in the air sometimes – sparrowhawks hovering and darting down on field mice with elegant precision; buzzards curving far above, mewing strange calls to one another. Once a falcon crossed my path – a peregrine it must have been – appraising me with a deep, dark, fearless eye. It skimmed the air as though powered by only a sharpness of mind, rather than any bodily effort. The speckles of its belly and underwing ruffled softly as it passed.

At first my own mind would not believe the reports of my eyes this spring. A great cacophony of squawking announced them from beyond the furthest houses: common geese, I first assumed, bound from the river to a local pond, but their wings were broader and beat in great arcs around them. The vigorous bodies above my head reflected only white as the sun caught them: swans on their migration, a ragged line of seventy birds at least. 850 miles across the sea they’d return home to Iceland and the raising of new families. Gaping skyward, I almost lost balance and found I’d wandered into the middle of the road. Three days later the scene repeated itself with a similar caravan of migrants.

Now spring is halfway over and hot-air balloons of sight-seers take to the sky. The winds are calm, letting them hang peacefully above the city. Blackbird, crow and sparrow, fieldfare and finch, all are making plans in trees and hedgerows, and I wonder what my own year still holds. Let me march towards it, open, undaunted, and welcome the surprise.

Desire is a bird
That we can never
Actually catch.
– Sri Chinmoy, ST 2094

2 replies on “Birds of the Air”

Thanks so much for reading, Bhashini! Glad to share similar memories 🙂