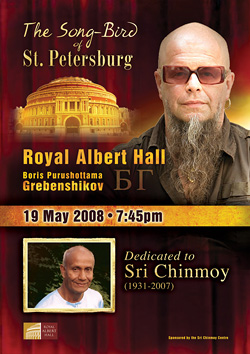 Boris Purushottama Grebenshikov is a living paradigm in the world of music and poetry, justly lauded in his Russian homeland and throughout the world. Tapping the ‘infinite silence’ within as a source of his prolific creativity, his songs are his direct interpretation of the universal musical consciousness.

No wonder then that he found in Sri Chinmoy a profound inspiration. With almost 1600 books to his name and over 22,000 songs, here was a Spiritual Master who shaped his own life’s service from the very fibre of music and poetry, singing the songs of Heaven into the ears of the earth.

Sri Chinmoy was born in East Bengal, 1931. Following an inner calling he moved to New York in 1964, to be of spiritual service and inspiration to the west. From then until his passing in October last year, his meditation brought forth a wellspring of creativity in many fields.

Sri Chinmoy met Grebenshikov in 2005, and offered him the spiritual name Purushottama. A unique friendship blossomed from there. The immediate bond between teacher and student was exceptionally deep given its outer brevity; a recognition and reflection of true inner harmony. In Grebenshikov’s own words:

“Before meeting him I could never imagine I would see with mine own eyes the enlightened spirit operating from within the frail human body. It made me realize we do not really understand how strange it is to be fully realized in the world that misunderstands Divine realization. And I am endlessly grateful for his love and unflinching selfless courage.”

As part of his soulful service, Sri Chinmoy offered over 700 free public concerts in the span of his life, which he dedicated to World Harmony. London’s Royal Albert Hall ranked among the most notable venues, where he last performed in October 2003. In this same spirit, and at the same venue, Boris Purushottama Grebenshikov paid tribute to him last week.

Under a 14-foot portrait of Sri Chinmoy, flanked by statues of Ganesha and Saraswati, the setting was an Indian garden at night. An enclave of trees and glowing candles waited on a backdrop of winking galaxies. Hoards jostled outside for a place in the hall, peering over galleries high up into the roof to catch a glimpse of the artist. The legendary Song-Bird of St Petersburg entered with a smile of joy equal to his air of poise and humility. As he took centre stage his audience could not have been more attentive, appreciative, or more alive with electric anticipation.

Some 20 musicians joined him, mostly from the Indian and Irish genres, and some of the finest in their fields. Two were from Grebenshikov’s original band Aquarium, which dates back to the early 1970s. The tabla talked in rhythm to four Irish bodhrans; a sarangi sang sweet melodies over a group of classical strings. The fiddle, tin whistle and Uillean pipes carried on an Irish banter with such unbounded effusion, precision and harmony, that the crowds could not contain their shouts of delight.

All the while Grebenshikov was an ocean of depth, speaking through an acoustic guitar as if it were a part of himself. His singing voice itself was, as always, an exquisite blend of strength and sensitivity; ageless and imperturbable wisdom with a sweet and heart-melting centre. The essence of the poetry, although mostly in Russian, could be felt even by the uninitiated, such was its earnest delivery.

The songs vaulted from pin-drop soulfulness to ebullient joy, via countless spirited forays into new musical realms. They stopped neither at folk, nor jazz, nor rock, nor classical, nor world music, but spun into a whirl of all these, where no division or identity could be defined, where music sprang forth unbounded and unadulterated from its source.

As a finale, Grebenshikov offered a bhajan he wrote in Sanskrit for the goddess Saraswati, and a loving song in the ballad style, which he wrote for Sri Chinmoy during one of their earliest meetings. The Sri Chinmoy Centre Choir accompanied him on the refrain:

It was a poignant end to a magical evening; an evening whose spirit seemed to have no age, no beginning, no end; no limits or worldly boundaries of any kind. With simplicity and utmost self-giving, Boris Purushottama Grebenshikov offered a tribute to his teacher which was at once fittingly grand, heartfelt and joyous.

More about the concert at GrebenshikovConcert.com
Review by Tejvan Pettinger at SriChinmoyBio.co.uk

[…] through their creative talents. In that vein, the ceremony was followed by a performance by Boris Puroshottama Grebenshikov, who offered a specially written song with the London Choir. Then the “World Harmony Art […]

I have no words to speak about spiritual, and sumangali you have done a fabulous job, i thank you for the link 🙂 And collecting stuffs about these legend is not a simple one to do, you have done it. I heartily appreciate you.

Thanks Nirmala, wish you could have been there!

Sumangali, only today I was reading it. I am also
amazed by Pavitrata’s writing about the best public they ever had in Royal Albert Hall. Shardul’s story is amazing, it’s definitely worth of its own post.

Sharani, I hope you had great time in Germany. Sorry you missed the concert, although you probably could have heard the applause in Rhode Island 😉 . It was far greater than my scant report implies, but I’m glad you enjoyed the read 🙂 .

Sumangali, May I belatedly thank you for writing about the concert. I used up the last of my vacation leave to travel to Germany the week before the concert and was unable to add on this equally profound destination. I was glad to get a taste of it from your post. Thank you so much for your comprehensive window into it along with the links to the concert web site and PDF of the program.

Shardul, thank you for your generosity in recounting this beautiful story; it is worthy of a post on its own. Such a sweet example of music’s universal language, and its reach beyond birth and death…

A tale from today:
I was out and about in the city and stopped in a park to play some music on my wooden flute – respite from the crowded pavements and noisy traffic. I was playing a lovely Irish air that I have just learned and some of Sri Chinmoy’s melodies. After some time I heard a little voice behind me say “Hello!” and I looked around to see a small boy of two or three behind me. I kept playing my tunes and he came closer and closer. When I finished, he started humming a tune for me – very sweet and simple. And so a harmonious tit-for-tat began and I played some tunes on my penny whistle and he started laughing and dancing. And he sang for me some more…

When it was time for me to move on, I cajoled him toward a woman that was watching us from a distance – his grandmother it turned out. She told me that he was dancing behind my back before he said hello, and went on to say that his mother had died shortly after giving birth to him. She had been a singer and sang a lot during the pregnancy and that the little boy often sang and hummed the tunes that he had learned from her before he ever saw the light of day! Can you imagine? So we shared a lovely moment together and music was our common bond and joy – no speech was required. A little Polynesian boy who could barely string a sentence together sang, smiled and danced his way into the heart of a 48-year-old boy during a quiet moment in a park…

“Music will play a most important role in bringing about world oneness, for music embodies the Universal Heart, the Oneness-Heart.” – Sri Chinmoy.

Love your blog Sumangali – it is a beautiful garden…

Thank you, Martin, for the link. What a beautiful post about your meeting with Sri Chinmoy at the Royal Albert Hall.

Thank you, Shardul, for your comment. I only wish anyone who feels and loves music, especially those who know Sri Chinmoy, could have been there. Alas, the Hall could only hold a few thousand. Your quote from Aldous Huxley is immortal, and your commentary so true. Music is so important for the spiritual aspiration of humanity. It always has been, and doubtless always will be, a bridge between Heaven and earth.

Lovely to read this article Sumangali – thank you. It beautifully captures the moment and the greater picture. I have heard so many nice things about this concert – a celebration of world music for sure. And as someone with a fondness for Irish music, I was thrilled to see the Irish component – Uilleann pipes, flutes, whistle and bodhrán. Asides from the silence and stillness one experiences in meditation, music offers some of our greatest moments I feel – a common language and the key to the great joy of oneness. As Aldous Huxley said, “After silence, that which comes nearest to expressing the inexpressible is music.” May God bless the musicians who play the music of their hearts and point us to the heavens…

[…] Boris Purushottama Grebenshikov – Sumangali Morhall was also at the concert. […]

Thanks for reading, Alf. I know words can’t do justice to music, but glad you got a glimpse of how amazing it was.

Amazing. It looks and reads like it was really special. Thanks

Thank you for reading, Liara. Yes, it was an incredible experience, which I still can’t quite assimilate. It really was like Heaven on earth. For me, and I know many others, music is such a direct messenger of the divine. It can transcend earthly boundaries to charm the heart profoundly and immediately.

This sounds simply marvelous! Thanks for sharing. I am familiar with Sri Chinmoy, but you have introduced me to another uplifting presence of spiritual thought and music. To expand our horizons reminds us life is forever unfolding in ways we hadn’t foreseen.