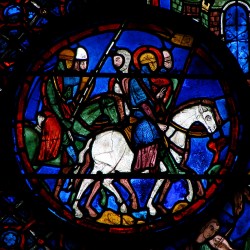 It was Oscar Wilde who said, “The only difference between the saint and the sinner is that every saint has a past, and every sinner has a future.” I don’t necessarily agree with the first part – not that I’m qualified to say – but there’s some hope for us mere mortals in the second.

Having had a bit of a grumble lately about saints not showing their human side, I was reminded of Saint Julian the Hospitaller – as described by Flaubert – and had to change my tune.

Strange that Flaubert the radical realist should choose an ancient and (probably) embroidered tale to re-tell. Some say it was his nostalgia for a faith by which he was surrounded in childhood, but which did not hold water for him as time went on. I wonder if he just got tired of his warts-and-all view of the world, and wanted to be lost in a good old swashbuckling legend.

Either way, his Three Short Works – Saint Julian making one – marked the rise of secularism and decline of spirituality in 19th Century France. (I’d say try Britain in the 21st Century if you think that’s worrying). Despite his usual skepticism, Flaubert was affected by the change, be that from a place of secret sentimentality, social concern, or hard-nosed observation.

Sadly my grade B French O-Level doesn’t stretch to reading it in the original, but the translated text ends:

And this is the story of Saint Julian the Hospitaller, as it is given on the stained-glass window of a church in my birthplace.”

This made me laugh out loud. As though all the intense drama and aesthetic refinement described by Flaubert could be detailed on a stained-glass window, especially one from the 13th Century. The window at Chartres is remarkable for its time, and obviously made an impression on the young writer, but the realism in this case is borne on the wings of his imagination. Delightfully so.

Having spoiled the punchline already, I won’t spoil the story if you haven’t read it, but it’s a cracking tale of transformation. Julian’s father is told by a soothsayer that his son will marry into the family of an emperor, and his mother is told he’ll become a saint. So it sounds like he has it all mapped out nicely, but that’s not taking into account the prediction he will murder both his parents.

Young Julian certainly has a nasty streak – killing countless animals for sport and vainglory – but he dotes on his parents and does all he can to avoid his fate. Ultimately he’s haunted by the animals he’s slaughtered, and after emerging from a deep terror, leaves home with the dual intention of protecting the local community and staying away from his parents for their own good. 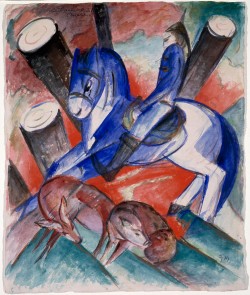 And so as not to give away the best part, that’s where I’ll leave Julian, as pictured above in the window at Chartres. In contrast, here he is as Franz Marc saw him – now in the public domain courtesy of the Guggenheim. Not sure if this is Julian in his hunting phase, in which case the animals are cowering from him. I like to think it’s after he’s renounced hunting, so they’re curled up safely asleep. Anyway, refreshing to see such a lively-looking saint.

From Guggenheim to Gutenburg, Flaubert’s Three Short Works are also in the public domain. A Simple Soul is my favourite, but she will have to wait for another time. There’s also an audio book – useful if you suffer from chronic insomnia, but I recommend reading Saint Julian from the page at least, and in a swashbuckling voice. À chacun son goût.