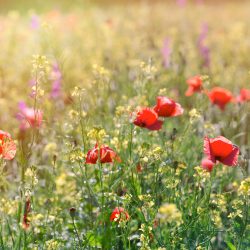 It was early on a summer Sunday I took myself walking through small enclaves of meadow and marsh, pondering how my love of England has grown as I’ve grown – from the petty resentment and boredom of teenhood where everything disappoints, to the middle of life with twenty years’ spiritual practice behind me. From this point, so much can be seen as rich with promise and inner charm.

Since finding ‘home’ in a spiritual community, not only have I lost the urge to run away (to just about anywhere) from the place where I was born; now there is nowhere else I’d rather be. In the aftermath of recent political friction, my fondness is all the more alive. In a Judgment of Solomon kind of moment, I found myself more heartbroken to witness my country slicing itself in two with vicious argument than I could be by either outcome of a vote – much less the resulting changes in government. Let anyone look after her, so long as she survives (and ideally thrives).

As I passed gorse sitting calmly by clover, the bullrush by bindweed, knapweed nestled by vetch, a poppy beside a purple orchid, and all the unremarkable grasses standing patiently between, I noted how nature finds its own balance. Meadows do not conform to any regulation of size or colour or provenance, yet the result is a carnival of life, ever-new and ever-changing. If weeds can figure things out between themselves, are we quite as clever as we’d like to think?

People from abroad joke about the rain in Blighty, but without it none of this would flourish. Not for everyone these isles with carefully defined (and rarely savage) seasons. This is not a place of high drama in a meteorological sense, or in many senses for that matter. I’m told expats to southern Europe long to spot a cloud in the unbroken blue, and miss staple items such as mists and squalls. I’m told the chocolate we enjoy would be wrong on every level to a Belgian, and his would be wrong to the Swiss. As with confectionery, so with weather (and Marmite, to an even greater extent) – it depends what one considered ‘normal’ in childhood.

Just as I was born in England, have chosen to stay, and have grown to love it incrementally, there are parallels in my life of meditation. Though I was not born to my spiritual path, I’ve always felt it was destined by a higher power than the force of my own tiny and fallible will, as was my country of birth. Every day I’ve chosen to stay, I’ve grown to love it more. Many people never find their place in the world, or when they do are bound by circumstances, fenced off from their dreams. Gazing out at wisps of cloud over a ripening field of grain, split by a railway and bordered by suburban housing, I realise I’m lucky to have the luxury of calling so many things ‘normal’, if not exactly ordinary – from sanitation to meditation.

A visitor to one of our meditation classes last week commented that the music he’d been hearing was all “pretty much of a muchness”. I had to laugh at a frankness so rare in Britain. “I suppose meditation itself is pretty much of a muchness,” I said. On the surface it seems like nothing’s happening, but therein is the potential beginning of everything. When my teacher Sri Chinmoy was young, he lived at an ashram in the south of India. His favourite job was washing dishes, because it required very little input from the mind, leaving him free to meditate. Most people would find the task dull and thankless, but from his meditation was born the life of a champion athlete, a writer, artist, peace dreamer and world server.

We’re fortunate the UK’s turmoil has been mostly administrative, but it does seem like we’re crawling through a tunnel, still peering through the gloom for the light at the end. Our problems are as nothing compared those of most other countries though, and even Blighty has weathered worse. This little tea-drinking, train-spotting, morris-dancing place may not be much, but it’s home.

Hope abides; therefore I abide.
Countless frustrations have not cowed me.
I am still alive, vibrant with life.
The black cloud will disappear,
The morning sun will appear once again
In all its supernal glory.
– Sri Chinmoy, STMS 47

2 replies on “For the Love of Blighty”

Thanks. I needed to hear that message of hope.

Thank you for visiting 🙂