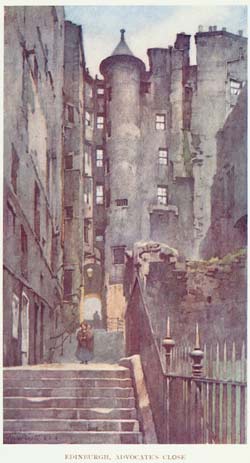 I’d put off visiting Scotland for over a year, even though York is inexcusably close, and even though a very kind open invitation stood since I moved north from Wales. That’s the trouble with open invitations, and things that are close: they hover just below the top of the list of things one may do, pipped to the post by others with deadlines and narrower windows of opportunity.

Through the dinge of a train window, hedges sprawled in intricate skeletal black, bothered only by crows. The sky of England sat thick and woolly, like something you’d find in an old ottoman. I entered then not just another country and culture; the hedge, the sky, the crows were identical, but carried the sense of an entirely different soul.

Arthur’s Seat, a questioning hook-nose of a mountain, reared out of flat browns and greys. A manmade mountain reached beneath: dark blocks of stone just discernible as ancient dwellings. “EDINBURGH: Inspiring Capital”, sped past on a building sign. Indeed, thought I, just then basking in its strange and powerful beauty. The train seemed to pull in to a work of fiction.

I gaped a good while in admiration at a church, the shape a child would draw for a space ship—aimed for Heaven rather than the Moon, presumably—black as a crow, in curled stone, seemingly too delicate to stand for long, yet as old as if it had grown up there as a brother to Arthur’s Seat.

I arrived, upon a short walk, at the “Old Town”. There, my Scottish friend told me, they built so many layers on top of each other because the surrounding land was swamp. It looks just so, as if they needed to be strong enough to hold fast to each other over centuries, lest they fall in, each wall a fortress of blank dark grey and turrets, up and up and up. Here and there tall alleys, or “closes” form chinks in the Royal Mile; chinks of strange blackness rather than light, climbing beguiling pathways, each with a curious historical tale. Despite the cold air, darkening sky, blackened churches, grey terraces, and obscure alleys, there is nothing of the bleak or eery about the city. Contrarily, its strength lends an inner warmth; a motherly sense of safety and familiarity.

A reformed coffee addict, I struggle a good deal this time of year when Starbucks roll out their Gingerbread Latte. I don’t care who knows it: call me shallow, call me a marketing sheep, my heart glows at the sight of that round green logo, and I look longingly in, or go in just to drink tea. I know I could do that anywhere—anywhere in the world—but strangely, a high stool by a Starbucks window is one of my favourite places for sightseeing. There in a street of kilt tailors, haggis mongers and cashmere shawls, I could fully absorb the details and subtleties of my new environment. 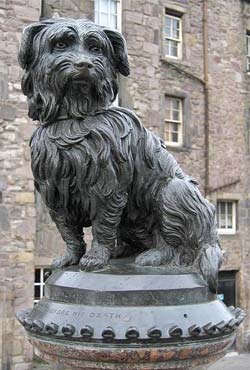 I had an appointment with two friends and colleagues to talk over some business before an evening meditation at the Sri Chinmoy Centre. “Meet us by Greyfriar’s Bobby.” they said, “If you get lost, anyone can tell you where he is.” I didn’t get lost, so there we stood: me and a bronze statue of a Skye terrier, on the corner of Candlemaker Row. I had to stand a little way off in fact, as he is quite the bigshot and often has his photograph taken. “Let’s go to Starbucks,” said my friends when they arrived, “it’s just around the corner.” I smiled, and once again narrowly triumphed over the guile of ginger coffee.

I was invited to help make a mandala, part of a double birthday celebration at the Meditation Centre that night. I was in my own Heaven with such simple yet detailed occupation, thrilling at the shades of colour the rice turns when dyed and drained, coaxing it into fine shapes on a printed template. I was amazed and touched by the splendour my friends created between them, under the auspices of “birthday cakes,” more a matching pair of edible temples. They told me of past visual extravaganzas for other birthdays, effusions of heartfelt creativity and childlike joy.

Birthdays are always given a lot of significance in the Sri Chinmoy Centre; Sri Chinmoy says that on a birthday, the soul remembers and renews its promise to God; the promise it made in Heaven for this lifetime. It is therefore a day of soulful meditation, of gratitude, and of divine happiness.

“Each birthday is a petal of a flower. The flower, petal by petal, blossoms and then it is ready to be placed at the inner shrine in the aspiring heart.”

I love to visit different Sri Chinmoy Centres around the world, as there is always something new and inspiring to be enjoyed in each place, even though we all share the same spiritual path.

As we came back out into the cold, the famous terrier caught my eye again. I asked my host why this little dog was honoured so in bronze. She enthused a long while and promised to lend me a book when we got home.

I unwrapped the bundle of flowers I’d brought for her, and her housemate passed me a random vase to put them in. “I know this vase.” I thought, then checked myself, certain I must be confused. “No, I know this vase.” The pink ribbon around its neck was faded almost to white, but I knew the shape of it in my hand.

2003 was the last time I’d been in Edinburgh—Sri Chinmoy happened to be there on my birthday. I’d dragged a dear long-suffering friend around all the flower shops in the city for the whole day to find the “right” vase of flowers to give to my Guru. Finally I found a plump handful of freesias and gerberas in shades of light pink, and a simple bulb vase. It did not look special to anyone else, but to me it was potentially perfect. In a hotel lobby I proceeded to take at least half of the stems away—the imperfect and overly fussy—to leave a very zen clutch of sprigs. I trimmed them further and moved them about for another half hour, defying anyone who came within a metre of my craft, and bearing the brunt of a little friendly teasing. It was not so much the result I sought, but more the route: the intensity of a working meditation, the striving for Heavenly perfection through a limited earthly medium.

In the evening Sri Chinmoy called for me, meditated with me for a few moments, then passed me a gerbera from the vase. It was more profound and significant than I can express. All that came tumbling back as I placed flowers in the same vase at my friend’s apartment, now four years later, this time white tulips and freesias.

Bobby belonged to a lowly shepherd named John Gray. Such was the dog’s devotion, he lay on his master’s grave in Greyfriar’s Churchyard from the day the shepherd died in 1858. For fourteen years, until his own death, Bobby guarded his master, leaving only once a day to eat. Gaining the status of “stray” rather than “saint”, or even “orphan,” merely due to his species, Bobby faced extermination by the authorities, or at least expulsion from his post: dogs were not allowed in graveyards, and dogs were not allowed to live at all without a license. His devotion won the hearts of the local children, who saved up their pennies in a big bag to buy a license between them. His exceptional manners earned him access to the grave, further defying human regulations.

The tale itself is no doubt greatly romanticised by its author, Eleanor Atkinson, but any historical inaccuracy is surely only in the finer details; the devotion and loyalty of dogs has the power to melt the hearts of our much more sophisticated species. Are we really so evolved? Perhaps, but perhaps we still have much to learn from our little canine brothers.

“Very, very early a dog learns that life is not as simple a matter to his master as it is to himself. There are times when he reads trouble, that he cannot help or understand, in the man’s eye and voice. Then he can only look his love and loyalty, wistfully, as if he felt his own shortcoming in the matter of speech. And if the trouble is so great that the master forgets to eat his dinner; forgets, also, the needs of his faithful little friend, it is the dog’s dear privilege to bear neglect and hunger without complaint. Therefore, when Auld Jock lay down again and sank, almost at once, into sodden sleep, Bobby snuggled in the hollow of his master’s arm and nuzzled his nose in his master’s neck.”

Very inspiring article. I had a wonderful tour of the place as I read every line. I never thought there are centres that give importance to birthdays.

Your post made me remember Fry’s dog from Futurama, named Seymour. Also of Hachiko in Japan.

Thank you for sharing.

Thank you so much for reading, Sharani. Sometimes real life seems like being in God’s Fairytale. I love that.

This post is itself like a bouquet of flowers perfectly arranged in a vase. One flower is your descriptive grandeur in your views of the countryside when travelling. Another is your sweet memories with Sri Chinmoy and birthdays. Another is Greyfriars Bobby. Which flower is sweetest? I think they are all sumptuous.