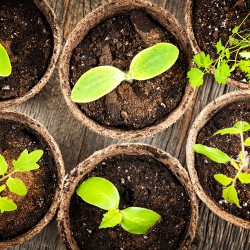 Do little people still read Dr Seuss nowadays, or am I showing my age? I loved taking time in those imagined worlds of the Cat in the Hat, Fox in Socks, Green Eggs and Ham – where everyone talks in rhyming couplets and looks a bit fuzzy round the edges. Such eccentricity is comforting to a child.

One story was far from reassuring though: Horton Hears a Who! Do you know it? Our hero – an elephant in this case – finds a speck of dust emitting a sound, and discovers an entire community living on its surface, complete with microscopic houses, shops and judicial system. Horton faces all manner of ridicule and physical hardship to save the speck from danger.

The moral of the story is: “A person’s a person, no matter how small.” No doubt it’s designed to teach children empathy and consideration, but it only served to keep me awake at night. It burdened my shoulders with far more responsibility than they could carry. On one page the speck is lost in a cavernous valley of clover, where every bloom looks the same. The image boggled my mind with potential disaster.

Later in childhood one of my many dreams was to grow a meadow full of English wild flowers. I knew that was a silly fantasy, especially when England is so densely farmed and populated. Unused land is a vast extravagance, even for people much more wealthy than we were. I became infatuated with the idea of English herbs instead, and often lost myself in The Complete Herbal of Nicholas Culpeper.

The characteristics and uses of each plant had been diligently documented, accompanied by line drawings. Culpeper’s devotion to nature enchanted me. It seemed God had already provided remedies for all the common ailments of body and mind – we only need seek them out. At home I was allotted a rockery of about 2 metres square and soon began my first herb garden. I was proud beyond measure.

But perhaps haunted by memories of Horton, I found gardening was not so straightforward. At school I learned that a cubic metre of soil can house 30 to 300 earthworms, and millions of microscopic organisms besides. I didn’t want to find myself guilty of separating families, demolishing schools or spoiling valuable food stores, let alone maiming or beheading anyone with my trowel. The fear was paralysing, and I soon had to retire.

I like to believe there’s a big difference between still living with my Mum in my forties, and living with my Mum again in my forties. Either way, I’m back in the same house with the rockery, but now with rather more responsibility for the rest of the garden too. I find myself in a world of rain gauges, bird feeders and water butts, with access to an ordnance of hoes, forks, rakes and shovels. I find myself pruning roses, toting a leaf-blower and researching compost aerators.

Maybe I’m showing my age again but I’ve long hankered after a council allotment for growing leafy greens and flowers, and there is now much more than that at my disposal. Whilst digging, raking or sweeping, I waste a lot of time apologising to worms, or suggesting to spiders that they hurry along before I change my mind. But since taking what I consider a more balanced approach to horticulture, I am at least no longer paralysed.

I recently read Kafka’s Metamorphosis – it seemed about time I did – and was mesmerised by his study of human nature, whether in a human body or that of an insect. While it’s best not talk to me about beached whales or the awful things humans do to one another on the news, I wouldn’t usually cry at the death of a cockroach. My tears were a testament to Kafka’s genius.

Where does one draw the line though, philosophically?

One could say at the border of sentience, but that’s difficult to discern, especially on a moment-to-moment basis. And everything is part of God after all – yea even the slugs and microbes. Perhaps intention is easier to gauge. I  would not hurt a fly deliberately, but neither would I mourn its loss – in fact I’d probably congratulate it on completing a difficult incarnation.

A Buddhist or a Jain would no doubt give an excellent answer, and I’d be interested to hear it. For now here’s an answer from Sri Chinmoy, since his are the teachings I follow:

“I always say that only divine action leads us to God and not the so-called good action or bad action of the moral life. That does not mean we should become immoral. Far from it! But sometimes we give too much importance to morality. Let us say that while walking a person looks around to see if there is an ant, a worm or an insect on his path. If he sees any tiny creature, then he stops in order to avoid killing it; he won’t move even though there is somebody waiting for him and he is supposed to go straight toward his goal. But he does not consider that every time he breathes in, so many insects and little creatures are destroyed.

Everybody stays on earth through the sacrifice of somebody else. God makes a sacrifice for all of us and that is why we live on earth. God’s action is the divine action. God has asked us to breathe in; He has commanded us. Out of moral action if we stop breathing and die, just because we will destroy some of the little creatures, this is very far from God’s intention. So this is karma. But the wisdom that comes from the heart tells us that God wants us to stay on earth and that He is inside us; He is inside those things that are being destroyed by us. If God Himself is in these creatures, then naturally nothing is being destroyed. God Himself is there. So we have to know which is divine action and which is our so-called good and moral action. Good action and moral action are totally different from divine action.”

Horton is now a distant memory. Let alone herbs, we have extravagant plans for peas and beans, spinach, chard and rocket come springtime. We must eat, after all, as well as breathing.