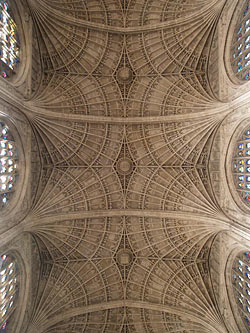 Alleluia: Qui timent Dominum
“He healeth those that are broken in heart: and bindeth up their wounds.”

This line shines from the page handed to me at the entrance of King’s College Chapel, part of a sung mass I am about to hear.

I have been here once before, many years ago, in the company of my Spiritual Master, Sri Chinmoy. He had come to pay homage to his own Guru, Sri Aurobindo, once a student at Cambridge University. I sat in these very pews and heard a similar mass. So much has changed in me since then, but the chapel stands quite the same: a vote of integrity in a changing world.

Almost everything reminds me of Sri Chinmoy, more now than when he was alive. The earthly loss of him, less than a month ago, is still raw in this fragile human heart. One thought is still enough to prick my eyes with tears. But just as the reminders of him come swift and hard from unexpected sources, so does solace to counter each blow. I am in Cambridge to meet with other students of Sri Chinmoy—about a hundred from Britain, Ireland and France. There is no sweeter solace than the family feeling amongst those I love.

King’s College Choir is considered one of the finest in the world, and I am especially fond of religious music. “We pray that you will sense something of the presence of God…” says the printed welcome. I pray the same, and that prayer is soon answered.

The ceiling is all half fans of stone, delicately crimped, sweeping to meet each other along the nave. It is as well to be indoors on a sunny day, if “indoors” has such a body of stained glass. The robes of saints glow as magnified rubies, sweet strong faces, soft leather shoes, strange serpents, rocks of orange gold, all the tales I do not know, as I was not raised a Christian. It is enough to gaze up to them and see the devotion that made them reflected onto me.

The Dante Quartet arrives accompanied by all its stately poise, then the choir in red and wide pleated white, some so tiny, barely old enough to leave their mothers’ sight. Schubert’s Mass in G could not have found a more subtle and receptive home, warm pure notes climbing the golden-white stone.

One—is he even ten years old?—commands a solo so brilliant, so strong, each note exquisitely tuned and executed, such as any cherub would envy. I study his features for the source of it, but find only a tiny boy, soft face bespectacled under a wide brown side-parting, standing quite firmly on the earth in sensible black shoes. Baffling.

The Bishop of Winchester treats us to a sermon on “Continual Godliness”: to maintain a general goodness in our own lives. Rather than thinking it the sole property of our elders and mentors, seeing it as something real and achievable. A most encouraging reminder.

Amazed, I remember the tune to one of the hymns. I disliked hymns at school, simply because they came at a very difficult time of life. Rather than giving me strength they always pulled me into melancholy—the jollier the worse somehow. But perhaps I am grown out of that phase: I hear only the jubilant praise of one God, my God, as we sing into a listening cavern of coloured glass.

Out in the autumn chill, we seem suddenly caught in an old movie; these views are such a dear part of England, and a dear part of my own memory. I breathe in their dignity and nobility, hoping to carry them home as inner souvenirs, so much more real and valuable than postcards.

The trees are in that state of perfection which only lasts two or three weeks. Red flames litter the roads, and yellow half-fans, delicately crimped. My walking companion tells me these particular yellow leaves were just so in the days of dinosaurs. I feel a sudden solace in that fact, and their mirroring the shapes of stone I had seen earlier; a hint at God’s Constancy perhaps.

We drink some tea and eat together, then watch a slide-show of Sri Chinmoy. To see him in health brings him so alive. To see his smile brings me tears: tears of thanks to God that I could spend these years absorbing all I could of his wisdom and joy.

Riding home I let my thoughts spin out from a melting sun as it disappears into a pine forest. Memories become a potent balm, softening the recent sense if loss. The heat of grief dissolves like the sun.

Thanks Tejvan. Glad you enjoyed the service too.

I too decided to go to the service. The singing was requisite in parts. I think you described it very well. it helped evoke some of the experience.

Bless you, Jen. Thank you so much for visiting.

Ohh I love this. So simple, so pure, so very gentle.

Thanks for sharing this lovely experience.

Blessings of peace to you,

Thanks Alf. Wish I’d done Latin instead of metalwork at school, but then that’s what Google’s for…

Wonderful writing. Thanks for sharing.