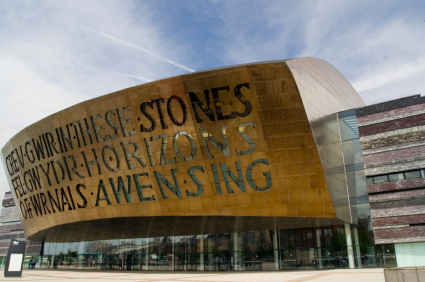 Giant glass letters look out from a face of steel, the words like an ancient promise: In These Stones Horizons Sing. The roof shimmers like a beetle’s back in the new spring sunshine, crouching in a burrow of layered slate. I had been using a map until I realised my destination could be seen quite plainly from miles around – Canolfan Mileniwm Cymru,  Wales Millennium Centre – a home for the arts and culture, covering nearly five acres of ground. I am to spend the weekend here with around 50 others. I travelled 5 hours to make a wish for peace; many have come much further than me, and some making a good part of that way on foot. 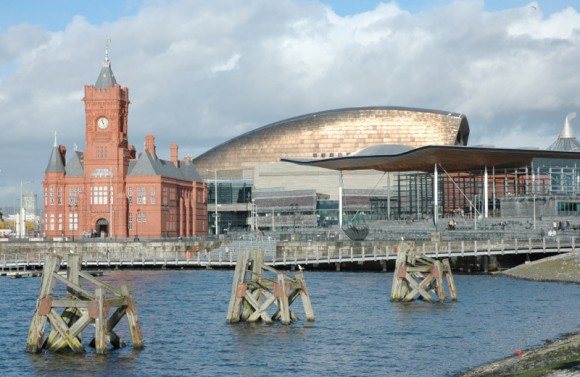 I lived in Cardiff for several years, but Cardiff Bay was still in its infancy then. Now the Bay is the seat of the National Assembly, and it is as though the heart of the city beats here now. The Senedd (Senate or Parliament) makes its home in a temple-like structure of glass and curving tactile wood, gorgeous and opulent in its very simplicity. The vast canopy looks out over the water as though hovering in a nurturing yet unobtrusive stance, with the workings of the building all nestled underground. The Pierhead serves as a second site for the Assembly, a landmark clock-tower of ochre-red brick. Lavishly ornate in a way only the 19th Century knew how, it has the air of a thing transplanted from a children’s story. 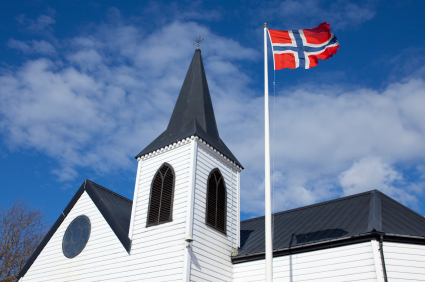 A very different but equally significant landmark survives from the same era. Further out along the water is a humble white timber structure, built by Scandinavian merchants, and known simply as the Norwegian Church. It was a religious and social meeting place for thousands of sailors until the mid 20th Century; then the export of coal declined, and the building all but perished from neglect. Restored with care and kindness, it is now an arts centre and tea room. It seems not to mind this change of occupation at all, perhaps only wanting to be as loved and useful to the community as it was born to be. The bright simple interior and peaceful setting seem a natural continuation of its history: a place to catch the light and the heart and the imagination. 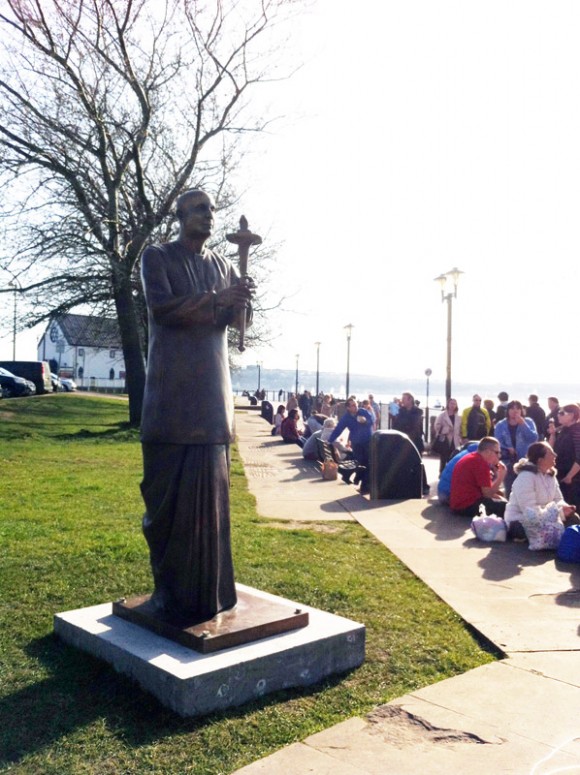 There is a pathway linking this simple place of reflection to the magnificent developments of Cardiff Bay: a quiet but well frequented passage of waterfront; a favourite of joggers, cyclists and dog-walkers; a place for families and visitors to take in the views, or for workers to seek a little calm in a busy day. A bronze statue will look out on the water from today as a permanent expression of prayer and hope. The accompanying plaque suggests to passers-by that they hold the torch, and make a wish for peace.

As the Mayor draws off its blue satin veil, already the statue seems to fit its surroundings so perfectly, I imagine it could have been there always. Its message of oneness is surely so natural to the people of Wales, whose hearts seem to know instinctively the meaning of unity, of self-giving and of perseverance. In these days of bustle and tension – whether individually or globally – there is surely no better time to stop and take a moment to wish for that one thing without which it seems no other quality can flourish. On the inscription is a quote from Sri Chinmoy:

Peace is not merely the absence of war. Peace is the dynamic and energetic presence of love, harmony and oneness in the world family.” 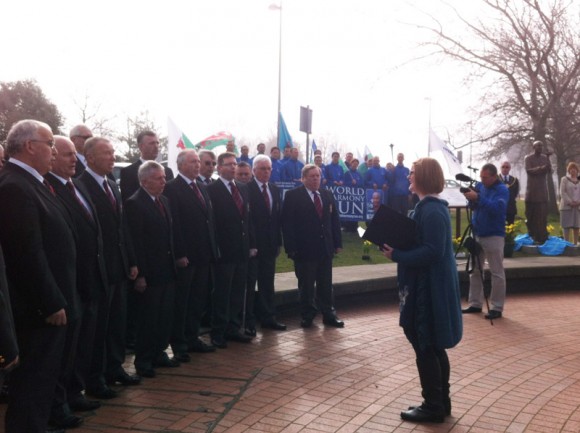 The World Harmony Run, inspired and initiated by Sri Chinmoy, runs from country to country each year, passing a flaming torch from hand to hand in a symbol of peace and friendship. This year is its 25th anniversary, and to mark the occasion the statue was donated by the World Harmony Run to the city of Cardiff. This is a place with a history of friendship with the World Harmony Run. Cardiff was dedicated as a Sri Chinmoy Peace Capital in 1997, when Sri Chinmoy visited and offered a concert at City Hall. It is with such fond memories of my own that I enjoy the ceremony, listening to the heartfelt and joyful speeches, followed by a performance from a traditional Welsh male choir. All at once it is simple and natural, and yet so indescribably glorious. The choir sings of ‘miracles’ and I realise that is the only word that truly fits the beauty and togetherness of it all. 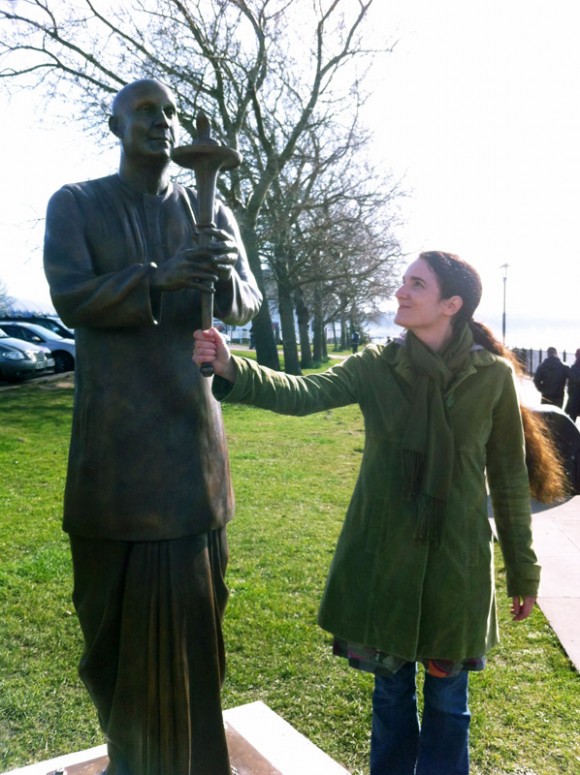 The author Alan Spence made a speech at the ceremony fifteen years ago outside City Hall, including a passage by Dylan Thomas written for the opening of the Eisteddfod in 1953. He reads it again today, and it seems equally and perfectly apposite. Lost for words of my own to describe this natural wonderment, I will end with a short excerpt:

Peace plays on a concertina in the vigorous, starry street, and nobody is surprised… “The town sang and danced, as though it were right and proper as the rainbow or the rare sun to celebrate the old bright turning earth and its bullied people. Are you surprised that people still can dance and sing in a world on its head? The only surprising thing about miracles, however small, is that they sometimes happen.”
– Dylan Thomas, from On the Air with Dylan Thomas: The Broadcasts

4 replies on “Making a Wish for Peace”

Thanks so much Sumangali for capturing the essence of that lovely weekend and presenting it to us so speedily! I was very moved by my time there with you all. I’ve been telling everybody here in Montpellier about it. One of the most surprising things for me was to see the immediate effect of the statue on the passers by. I thought it would take a while for the idea to catch on, that only slowly would people figure out that it was fun to hold the torch with the robed Indian figure, and make their wish for world peace; but as soon as it was unveiled and the ceremony was over, tourists started to come and get each other to take their photo holding the torch! They just knew what to do immediately, even without reading the official plaque. The statue is a definite and positive presence already. It’s a perfect spot for it too; it’s such a beautiful atmosphere there by the water with all those interesting buildings around. I didn’t realise Cardiff’s skyline was becoming so adventurous and swish…

Hello Hita, great to see you here! And it was great to get together at the weekend, thanks for your adding your memories. It’s amazing how people were catching on to the idea right way, as you say, sometimes even without reading the plaque. It would be fun to do one of those time lapse films over the course of day to see how people interact with the statue and its enivrons…

[…] Making a wish for peace – blog by Sumangali ← A Weekend of Joy in Germany No comments yet. […]