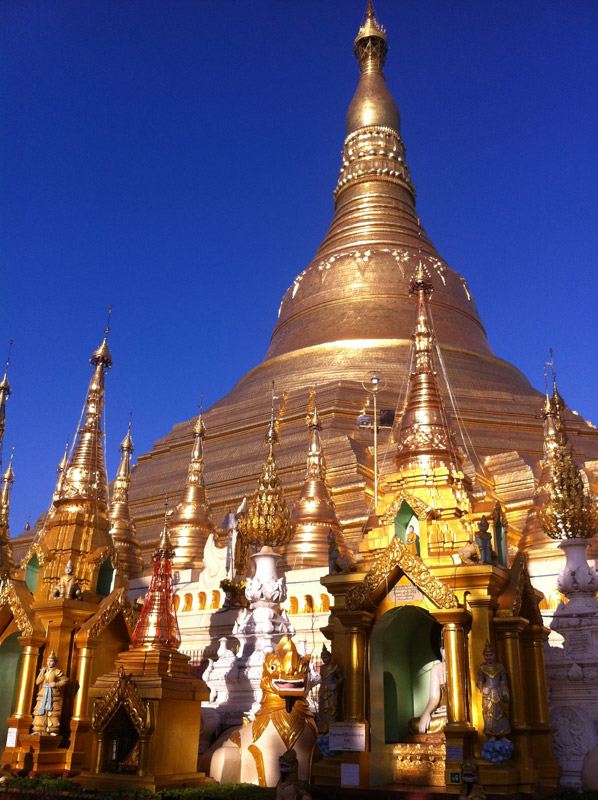 In 1985 I first went to Burma (as it was still known then). My father was called there on business while I was visiting his home in Singapore, so the only option was to join him. Like most fifteen-year-olds, I did not generally find anything or anywhere interesting, especially things and places that were forced upon me.

I mostly remember the dirt. Our hotel was apparently the best in Rangoon (as it was still known then), and it was dirty. I would long to wash the traffic and heat off me when we had been outdoors, but the water even came out brown from the tap. The drawers and cupboards were lined with a layer of desiccated flies.

We had a chauffeur of sorts. He chewed and spat betel nuts, grinning wide with reddened teeth like a brown-skinned Dracula. He drove a 1950s Zephyr Zodiac, so riddled with rust we could watch the road speeding under us through holes beneath our feet. It was one of the better cars, and certainly better than the buses. Too many faces could be seen pressed against the windows as we passed them; clusters of outdoor passengers too, clinging to the back steps and railings with only fingers and sandalled feet.

I just wanted to go home.

Until the day I was taken to Shwedagon Pagoda.

2,500 years ago in India, it is said Lord Buddha gave eight hairs from his own head to two Burmese merchants, who had brought him a gift of honey cakes. The hairs were presented to the Burmese king, who enshrined them in Okkalapa (as Rangoon was known then). The stupa gradually evolved into its present brick pagoda of 326ft, encased in thick gold plates donated by monarchs and noblemen.

We had to remove our shoes even to mount the long covered stairway at the entrance. People were selling things from stalls along the way: thick stems of incense or sheaves of flowers as offerings to the shrines above. Some sold little shrines for private devotions at home: images of Lord Buddha in jade or brass, or wood ready for a finish of gold leaf. To that day I had never felt such sacredness, and I was only at the gates of the shimmering palaces of prayer beyond. I could barely utter a word, and did not want to try. Breathing itself seemed almost ill-mannered.

The top was a flat tiled terrace, littered with cockroaches: dead, alive, or halfway between. Grubby children of four or five years old dogged us with cupped palms and brown beseeching eyes. My eyes were only for the gold edifice reaching up to the midday sun. That sense of completeness was new to me, and I felt the very air around me was made from it. Although admittedly with the advantage of a hotel breakfast inside me, I wondered how I or anyone could ever need more than that.

Twenty-seven years later, a very different ‘me’ is returning to a very different country, but the things that matter are still the same. Rangoon is now Yangon. Burma is now Myanmar. The labels were left over from British colonial rule, as was the directive to drive on the left side of the road. They drive on the right now, like most of the world, but the cars are still right-hand drive. Oddly I feel safer in this traffic than I would even at home. It is the people who matter most here: to me, and apparently to each other. There is a sense of unity, an inherent awareness of others as part of oneself; an awareness that Western culture seems to have long forgotten. 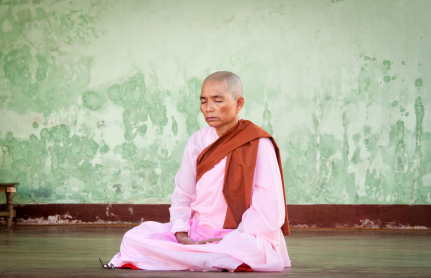 There are monks and nuns everywhere in Yangon. Everywhere. Not just in the temples and monasteries, but in the streets and shops: walking, talking, smiling, praying, asking for alms. Robed and bareheaded, some are children, some crooked with age, and all the stages between. Spirituality is not just a hobby, or some quaint archaic choice; it is as natural and essential as breathing. Here amongst the crowds and pollution, I am thus completely at home.

The British refused to remove their shoes at Shwedagon when they ruled here in the 19th Century. Could there be a greater or more symbolic insult to this country of sanctity and selflessness? I offer an inner apology on behalf of my forefathers as I place mine in a plastic bag. I am glad to feel my feet on this tiled terrace; to be nearer to it, to know it through my every nerve and sense. There are teams of slender ladies kneeling in sarongs, smiling and scrubbing the ground in methodical squares. Others sweep gently with wide brushes, in twos or threes. There is not an insect to be seen.

Yangon will be my home for two weeks, as part of a trip organised by the Sri Chinmoy Centre. Sri Chinmoy used to travel with some of his students to various countries each winter, taking a break from the harsh New York weather, and dedicating some days or weeks – whatever each person could spare – to meditation and recreation. Sri Chinmoy himself would be a fount of joyous creativity as always, sometimes spending time with us in private gatherings, or meeting with dignitaries, or offering public concerts. Since his passing in 2007 we still uphold the tradition, wintering together in warmer climes for our mutual joy and inspiration.

We sometimes offer Sri Chinmoy’s music to the public during such gatherings too. Today a male choir is singing some of his songs dedicated to Lord Buddha, at Shwedagon Pagoda. Sri Chinmoy wrote over 22,000 songs of a devotional nature, describing and inspiring the human aspiration toward the divine. Some were also written to honour contemporary luminaries, others for Hindu cosmic gods and godesses, some for Avatars and saints from other world religions. Today is a prayerful offering to Lord Buddha. I hear the familiar tunes and shape the words in my heart as I face that great golden spire. I offer my thanks for this completeness, the full circle of sacredness and peace that has brought me back here.

“Taxi? Where are you going?” asks a portly man in a faintly British accent as I reach the street again with my companion. His dignity and courtesy leave us no reason to withdraw, and we tell him the address. “Very good car, this way,” he nods, with a sudden glimmer of mischief. “Forty years old. Very good car.”

The only passenger window is a panel of scratched perspex. There are no furnishings except a pair of doormats on the back seat that has long parted from its springs and cushioning. After a couple of choking rasps from the ignition, the man signals to a couple more drivers nearby, and they willingly shunt us along from behind.

“Are they going to push us the whole way do you think?” I ask my friend. All five of us are in fits of giggles; laughing not at each other, but with each other at the unfolding adventure. I am forty-one though, so I should not really joke about the car. For a moment the back window frames a pair of betel-Draculae, then two hands waving goodbye as the engine coughs back to life.

“What do you think it runs on?” I ask my friend as a strange-smelling smoke drifts up from the rusty floor.

“The Buddha’s Grace, 100%,” she replies, nodding towards the dashboard, which is itself a row of little shrines. 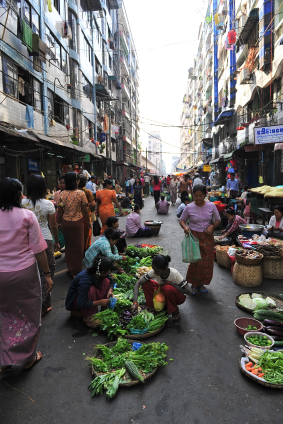 We stop at a market along the way: a banquet for the senses. Some stalls are set up on little crates, but many proprietors squat by squares of canvas on the ground from which their wares are displayed. Were it to happen like this at home, it would be chaos, but there is no bustle or self-importance here. The slim and graceful locals weave along smoothly, like fish through water: neither jostling nor even accidentally brushing past me, let alone disturbing the stalls. The air is heavy with charcoal smoke and the tantalising scent of fresh fritters, mingled with durian and incense. The wares each have their own distinct dominion, and are carefully tended. Fruits are stacked in neat pyramids: pomelo and pitaya, rambutan, mango and papaya, so plump and fragrant, so bright and glossy in the sun they look like wax models.

Then back to our temporary home: a clean and friendly hotel beside Inya Lake. The sun sets behind a lattice of cloud, and the waterbirds make their final catch of the day. With my bare feet in the grass, I breathe in the vast stillness, knowing somehow that all is well in this world. Amidst the struggle and loss and chaos, we are each a part of this magnificent whole: little bricks of gold in this glowing edifice called Earth.

Thank you, my Myanmar, for reminding me. 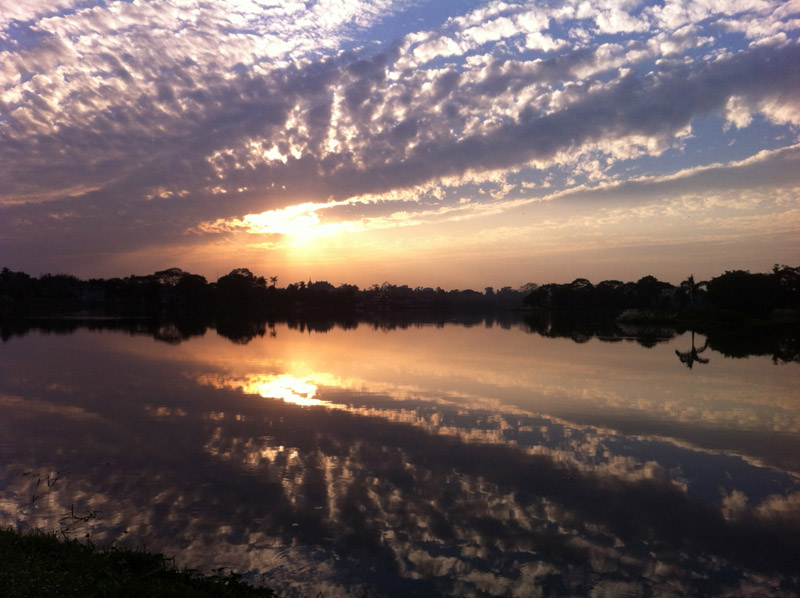 4 replies on “My Myanmar”

It was so interesting to find your website, almost by chance. It’s interesting to know what you remember of that first trip to Myanmar. For me, I remember the Inya Lake Hotel with its grey sheets and awful Russian Architecture, but that was a part of Asia, albeit different to the classical buildings and places of long ago. I remember walking in the rain, after persuading you and your brother to get out of the car, walking the rows of tombstones sown like seeds of death, forgotten heroes perhaps of a war long past. they were the young, the oldest was about 33 or 34. I remember the people’s smiling faces as they showed their inner contentment; the ladies and children’s faces painted with a powder to stop the sun burning.

So long ago – I am glad that you went back, although in a sense not back, since it was a different you that went this time. A person hewn from a different rock, purposeful, at peace within and hopefully without.

Hello Daddy, what a surprise to see you here! Thank you for adding your own descriptions, they are really enchanting. Things must have seemed very different through adult eyes. I do remember the cemeteries, and the vast solemn silence there. I don’t remember the rain though – maybe I had not yet grown my current love for it, or maybe as a teenager, I was more concerned about messing up my hair than I am now. Love to you too, and thank you again.

A very, very inspiring story Sumangali, I feel myself transported to a higher, gold-leafed plane in reading.

And what a great new look to your blog!

Thanks so much Jaitra! Glad you enjoyed the news, and chuffed you approve of the new design 🙂