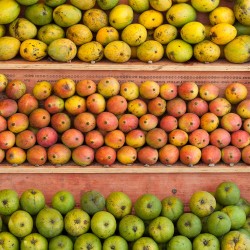 It was part way through a bowl of shahi paneer at a local restaurant that I remembered Mr Ramesh. There was something about the chef that brought my old tutor back to me from a half-buried past – something quiet, humble, yet dignified and neatly pressed. Any dish is more delicious when offered with care and attention, as Mr Ramesh knew very well.

In Britain we are not generally known for excellent service, except in high-end establishments, so it’s always a happy find in everyday places. The recession has brought with it more attentiveness throughout surviving businesses, but to your average British customer such can often come across a bit too chummy, or even frightening. It is certainly a delicate balance.

I’m always fascinated to see how customer-facing outlets are run, having worked quite a lot in retail, and having studied business at university. Obviously at the nitty-gritty level that meant studying how to make money, and indeed there were many nitty-gritty topics to cover – finance, law, logistics and so on. From Mr Ramesh we learned service management, which was something of a departure.

In appearance he was rather like an Indian Hercule Poirot, but with a short pointed beard as well as the moustache. He spoke with the precision of a newsreader, but so softly as to command pin-drop silence in his lectures – no questions asked or answered. The tutorials were another matter. Having lost someone close to her, one of my peers was intrigued by the after-life, and I was intrigued by spirituality, so the conversations would go something like this:

“There are many further improvements you might make to the supermarket layout in last week’s case study. You must understand that certain customers prefer little or no interaction when making a purchase, while others benefit from conversation and personal recommendation. Any questions?”

“Yes Sir, after someone has had a human incarnation, is it possible to then be born as a dog?”

This would bring a glitter of mischief to the otherwise inscrutable face of Mr Ramesh.

“According to my own beliefs, no, one would not return as a dog.”

“No, only human… probably.”

“If one wants a better life as a human, what can one do in this life to ensure it next time?”

“That would depend on how you define the word ‘better’. In any case there is no assurance, since we are dealing with eternal time. If one accrues good karma in this life, it will come back sooner or later in some beneficial form… and vice versa.”

“Sir, what is the fastest way to accrue good karma?”

At this point Mr Ramesh may have closed his almond-shaped eyes and tilted his head. We thus knew we would have to wait until some later date.

“So you see that if you pre-weigh and package exactly the same cheese as is served at the delicatessen counter, and store it in open refrigerated units, you will undoubtedly sell more in quantity.”

It was a very slow method of learning about spiritual matters, but it made a deep impression on me back then.

I always had the sense from Mr Ramesh that there was far more to service than he taught in formal lessons. It was about making money, yet it was not about making money at all. In the Bhagavad Gita, Sri Krishna tells Arjuna, “Thou hast the right to act but claim not the fruits thereof.” Had we the chance to probe him further, Mr Ramesh may well have quoted this line. I had not yet heard of a Divine Enterprise, but I knew that to my tutor service and spirituality were not separate topics.

Karma Yoga is dedicated service. When we practise Karma Yoga, we try to make all our work a true dedicated service to the Supreme. In ordinary work we immediately expect something in return; we expect success or fortune or advancement.
– Sri Chinmoy, CACR 79

My hunger for spiritual learning easily overtook the hunger for a high-powered career in commerce – I’m not sure that was ever so voracious in the first place – but while I’ve been following the teachings of Sri Chinmoy for the best part of twenty years, that’s not to say I have rejected my formal education. At my stage of development I cannot meditate twelve hours a day, and am not a very sporty type. Work is thus essential to my equilibrium – it helps offset the melancholy and lack of self-assurance that are still part of my human nature. It’s the motivation that has changed over time, rather than the discipline of service itself.

I was recently learning the song ‘Katha Nai Kaj E Madhur Bani’ by Sri Chinmoy, part of his Garden of Love Light series, which describes Karma Yoga so beautifully. The translation reads:

Not word, but work:
This sweet message awakens strength
in our heart.
Inside work remains hidden the fragrance
of flowers.
Let work be the language of our heart and
our proclamation.
Our only aim is progress, not victory and failure.
– Sri Chinmoy, GLL 239

So it was that over a bowl of shahi paneer I thought of Mr Ramesh, and all the conversations we never quite had. Fortunately, in time my inner hunger was fed more sumptuously than I could have imagined.

2 replies on “Not the Fruits Thereof”

What a lovely, peaceful, profound commerce professor! A jewel rarely found. Thank you for sharing these precious moments – it is enriching to know that there are spiritual people from all walks of life.

Toshala, what a lovely surprise to see you here! Thank you for your visit, very glad you enjoyed the little story 🙂