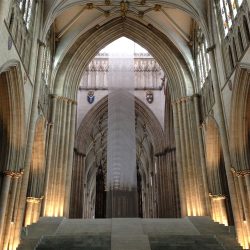 Since the Mystery Plays chart the story from Creation to Last Judgement, there is only God at the beginning – God with a Yorkshire accent. There’s a certain kindliness, a kind of certainty to a Yorkshire God – you’d probably know where you are with Him. He’d be firm but fair. “Ah, merciful Maker, full mickle is Thy Might,” speaks the first of seraphim, as the planets and realms are made. All angels rise and Lucifer falls. Christ is born on earth.

It’s only the second time in 700 years the Mystery Plays have been staged at York Minster – usually they’re out in the open air. This performance, nearly 4 hours long, used to be 48 separate plays in the 1300s. Here ‘mystery’ was also a play on words – its alternate meaning is ‘craft’ or ‘trade’. Each was staged as a pageant by a different guild, travelling through the city on wagons. Shipwrights covered the building of the Ark, goldsmiths the coming of the three kings, bakers the Last Supper, and so on.

Angels would not have had LED halos and planets would not have been marked by enormous helium balloons as they are today. There would have been no dry ice or coloured spotlights or backdrops lit with immense graphical projections. But what endures through the ages is the unity and enthusiasm of local people. Excepting one professional actor – as Jesus – all roles are played by the community. There are over 150 players, from tiny children to octogenarians, and many take more than one part. Then there’s all that goes on behind the scenes, from the orchestra to carpenters and costumiers.

Many moons ago, when I was a stripling at art school, I had my heart set on studying theatre wardrobe. I loved the wild creativity of theatrical costume, as well as its transitory nature, and am still peculiarly fascinated by its construction. In this epic production, countless props and costumes were made, largely by the hands of local volunteers. Many are animals: from sheep for the shepherds at Bethlehem, to elephants, giraffes, chameleons and walruses for the Ark. With the humblest of materials – hessian, cane, canvas, wool – the stage is alive with a sample of all God’s inventions. The detail is astonishing. The effect is entrancing.

I’m glad to have bagged a ringside seat so as to admire the wardrobe’s very seams and hems. The Roman soldiers are particularly convincing, and they remind me the Minster rests on the site of an earlier Roman fort. While there has been some form of church at the spot since 627 AD, the city itself was founded as Eboracum in 71 AD. Constantine the Great was crowned Augustus right here in the year 306. He was the first emperor to allow Christians to worship openly, and brought an end to their persecution. Could there be more fitting a place for the staging of this story?

The players are not always in ancient or animal costume. As members of crowds and of the choir, as wafters of fabric seas and rivers, as hoisters of planets or paper birds on fishing rods, they are in mufti, and quite unashamedly. Jeans and jeggings, khakis and anoraks, t-shirts and biker jackets somehow seem perfectly apt. This is the community as it lives now, and it need not pretend to be anything other. Herod may need 13 attendants to carry his golden train across the stage, but addresses the visiting magi: “Now then, kings, how do?” While the time spans every era, one cannot not forget one’s true location.

Though I sit transfixed by the heart-wrenching brutality of the Crucifixion, and the ethereal light finally climbing the central tower as Jesus rises to Heaven, it’s the message of the Last Judgement that stays with me most powerfully. Since I did not pay attention in RE and never went to church, you probably know it better than I do. Those who had fed, clothed and cared for Jesus are offered safe passage to Heaven. The crowd is baffled: when had they done such things? When feeding and caring for one another, comes the answer. Those who withheld their love from one another are herded to… the other place, (though I like to think the Yorkshire God gives them another chance in an unseen epilogue).

I dare say there are not many stages blessed by Archbishops. I’m not sure how to feel about ice cream being served in the interval, or beer in the Dean’s garden next door – that’s perhaps a tad terrestrial – but overall I am left greatly encouraged by this sense of community, and of the ultimate triumph of good over… not-so-good. I feel jolly lucky to live here, in the erstwhile capital of Yorkshire – ‘God’s Own County’.

2 replies on “The Mystery Plays”

It sounds amazing! Must see it one day

You’d be most welcome! 🙂