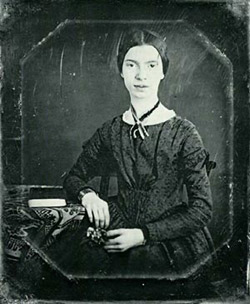 Emily Dickinson referred to herself as a pagan. Some biographers would go so far as to label her a druid for her worship of nature. But was this apparently stubborn heathen life really built on atheism?

On the surface what seems a blatant rebellion against the Christian reforms sweeping New England in the 19th Century could be misinterpreted as a lack of spiritual inclination. If we look beneath even a single veneer we will undoubtedly find true spirituality at the heart of her endeavour; far from snubbing God, but simply insisting on no less than a first-hand experience of Him.

The poet shunned religious doctrine, but did she shun religion? Certainly not as a whole, and even then it may be merely a matter of syntax. The words ‘religion’ and ‘spirituality’ may at times be used interchangeably, and at others a fine distinction must be made. Charles Anderson chooses to make no distinction, using the word ‘religion’ in its broadest, and perhaps most primal sense:

“The final direction of her poetry, and the pressures that created it, can only be described as religious, using that word in its ‘dimension of depth.’”

Emily inherited the Puritan traits of austerity, simplicity, and practicality, as well as an astute observation of the inner self, but her communication with her higher Self was much more informal than her God-fearing forefathers would have dared. The daughter of the ‘Squire’ of Amherst, she came from a line of gritty, stalwart pioneers, carrying what was almost considered the blue blood of America. Her family was far from poor, but she did not lead a lavish life, for the Puritans abhorred luxury and waste (even a waste of words, which trait the poet did well to inherit).

She accepted the Puritan ideals of being ‘called’ or ‘chosen’ by God, and fully embraced the merits of transcending desire, but not the concept of being inherently sinful:

“While the Clergyman tells Father and Vinnie that ‘this Corruptible shall put on Incorruption’ it has already done so and they go defrauded.”

She had faith in her own divinity, so perhaps she was yet more certain of God than her peers. She did not claim to fully understand Him, or even to have perennial faith in all His Ways—her poetry bears a continuing strain of doubt—but she certainly did not fear Him. The inner freedom this afforded her—rare for a woman of her time—brought her to the point of being almost cheeky in her familiarity and certainty. This confidence fed her poetry sumptuously, and gave it the well-known child-like quality. To her, truth was in nature. In that beauty she could see and feel God directly:

Some keep the Sabbath going to Church —
I keep it, staying at Home —
With a Bobolink for a Chorister —
And an Orchard, for a Dome —

Some keep the Sabbath in Surplice —
I just wear my Wings —
And instead of tolling the Bell, for Church,
Our little Sexton — sings.

God preaches, a noted Clergyman —
And the sermon is never long,
So instead of getting to Heaven, at last —
I’m going, all along.

Emily did actually attend church regularly, sometimes traveling to hear some of the rousing and charismatic preachers who stamped their mark on that era. She was often moved by these sermons, perhaps as compelled by the speaker’s delivery and the construction of words as the message within them. But this was not enough to entice her to succumb to the fierce religious revival. One by one her friends received an inner calling and were ‘saved,’ officially accepting Christianity. Members of her close-knit family eventually followed suit, including her strong-willed father, and finally her brother, Austin, perhaps her closest ally. Emily would not commit to something she could not sincerely feel, even under the unthinkable social pressure that surrounded her.

Until the age of 30 she continued going to church, although she was excluded from certain meetings and services open only to those who had been ‘saved’. She became increasingly reclusive throughout her 30s. It is tempting to see her seclusion as further evidence of spiritual asceticism. Her spiritual path was certainly intensely lonely in such a social climate, but she craved aloneness more and more, and seclusion somehow formed a symbiotic relationship with her art. Increasingly her art became an expression of her spirituality.

Immortality (“the Flood Subject” as she called it) consumed Emily’s consciousness. Dwelling on death was natural in those times as illness and general hardship frequently took lives around her, her awareness heightened further by the many years spent in a house adjoining a cemetery. But dwelling on death was also almost a spiritual practice, a ‘graveyard meditation,’ a means of focus, breathing life into the concepts of Eternity, Infinity and Immortality.

Poet and philosopher Sri Chinmoy said of the poet:

“Emily Dickinson wrote thousands of psychic poems. One short poem of hers is enough to give sweet feelings and bring to the fore divine qualities of the soul.”

“With a deep sense of gratitude, let me call upon the immortal soul of Emily Dickinson, whose spiritual inspiration impels a seeker to know what God the Infinite precisely is. She says:
‘The infinite a sudden guest
Has been assumed to be,
But how can that stupendous come
Which never went away?’”

From Patriots of America by Sri Chinmoy

What drove her consistently was that she needed truth, and at any cost. She needed to see it with her own eyes and feel it with her own heart, not grasp at it in the words of a clergyman but explain it to herself through her own words. It seems she was even ready to die for her cause:

I died for beauty, but was scarce
Adjusted in the tomb,
When one who died for truth was lain
In an adjoining room.

He questioned softly why I failed?
“For beauty,” I replied.
“And I for truth, —the two are one;
We brethren are,” he said.

And so, as kinsmen met a night,
We talked between the rooms,
Until the moss had reached our lips,
And covered up our names.

Emily’s truth-seeking was a spiritual quest that governed her inner life, and naturally blossomed through her poetic works. Her own words, in a letter to a friend, succinctly claim Eternity and Immortality as her own. Perhaps they also presage the enduring spiritual appeal of her writing, far beyond the short span of her life:

“So I conclude that space & time are things of the body & have little or nothing to do with our selves. My Country is Truth.”

13 replies on “The Spirituality of Emily Dickinson”

Thanks so much everyone for your comments so far, this is blossoming into a refreshing and inspirational discussion! I am happy to meet such broad-minded and understanding people. I hope more will add their voices…

“If we look beneath even a single veneer we will undoubtedly find true spirituality at the heart of her endeavour; far from snubbing God, but simply insisting on no less than a first-hand experience of Him.”
Emily is a true contemplative in not settling for the security of possessing symbols, words…even theological words.. or concepts as the real encounter with God, but she chooses to seek a direct unmediated experience of the inconceivable God who dwells within her. Emily is effectively adhering to the teaching of the great Zen Master Daisetz Suzuki who said: “It is necessary, absolutely essential to believe in ‘no thing’.” In this Emily is at the heart of the “good news” proclaimed by Jesus as recorded in the opening chapter of the earliest gospel [Mark] in the initial words of Jesus(i.e., his “keynote”); “Change the way you think about reality; the present moment is the right time, and the Kingdom of God is WITHIN you; believe THIS good news”[Mark 1:14-15].

I make art inspired by Emily Dickinson’s poems. If you’re interested, check it out: http://www.etsy.com/shop/UnexpectedKnock

Leo, the word religion is mentioned in the Bible. it says that if a man cannot bridle his tongue, then his religion is in vain. I believe it is saying that if you cannot control the words you speak, then all of your religious beliefs are useless. God is here, and I do believe that Emily knew Him. Just in her own way. I think that she did not allow what man thought to limit her view of Christ and His Brilliance. She wrote about what she saw in nature, in life, and in death. And what she saw, was Jesus Christ, my savior. By the way, I’m 15 years old. 🙂

Spirituality is divinity. Divinity of love in our true relationship with God. That’s made every living being so special and every life is sacred. Everything created by The Supreme Godhead and by Love alone they interrelated. That’s why I also agree we can find God in Nature, the expression of God’s divine love.
The thoughts (or realizations) of Emily Dickenson truly a gift from God.

Nicely well put. Man (and woman) always came up with different ways of looking at religion but everyone ultimately agrees on what it is all for, the belief in a higher power. John locke and other philosphers of his time (the enlightenment) talked about this and I suspect Emily may have at the least based some of her poems on this philosophy.

Religion is man made. Spirituality is God created.

To be honest, I’m not really familiar with Emily Dickenson’s work but I am definetly interested in finding out more about her.

I also believe Emily seen God in nature and felt Him around her. After all He created everything and therefore He is there, in nature and can be sensed. Religion and spirituality are two seperate ideas. Religion is manuipulation and man formed laws and regulations of christianity. I believe that we all have our own ways of finding God and our own ways of worship and no one should demean anyone else. We will all know the truth when our earthly journey has ended and there we will find all has ended in the same place. No matter how we find our way to God, He will be there during our journey and await us at our destination and I believe Emily understood this.

I too think there is a distinction between religion and spirituality. I don’t think the word religion even appears in the Bible once, but if I’m wrong then please correct me.

I think Emily did sense God all around her and saw his manifestation in nature. Religion and spirituality are connected in a sense but neither are synonymous with a personally felt relationship with God and I think that’s what she felt imho.

It seems that throughout history, one group of people has tried to foce another group into a belief system. Free thinkers have been ridiculed and thrown in prison because they usurp the authority of the people in power. I believe in God, but I do not believe in religion. Religion is manipulation through guilt. People should find their own path to god. Eventually we will all be in the cemetery anyway. The important thing is the destination, not the path to get there.

I suspect that only eternity will reveal the truth about Emily Dickinson’s beliefs, but I must agree with some of her writings. God is and has always been present, how we perceive Him varies greatly, but His greatness remains the same.

I sense religion reflects ideas that are shaped and imposed by human beings in part for power and personal gain of few. I sense spirituality is a concept that empowers human beings to realize they control the evolution of their sense of self, connection to something beyond them, and their own destiny. It doesn’t support the idea that a few control and are better equipped or more knowledgable than the majority.