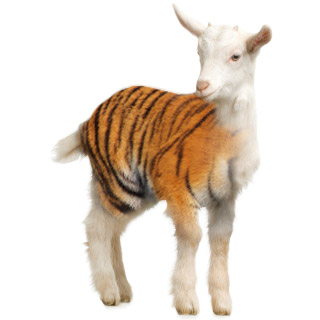 Long ago in the 19th Century,
Sri Ramakrishna related a story to his disciples, which comes to me very often. As I recall, a tigress went to attack a herd of goats, but a hunter saw her and killed her. As she was dying she gave birth to a cub, who was left behind with the goats. Goats were all the little cub knew, so he thought he was one of them. The nanny goats nursed him, and when he was weaned he ate grass as they did. Even when he was fully grown, he would bleat like a goat and run away if the herd was under attack.

One day a fierce tiger came hunting, and was amazed to see one of his kind bleating and trying to flee. The fierce tiger grabbed the grass-eating one and dragged him to a pool of water where he could see his own reflection.

“See, you have a face exactly like mine,” he said, “what a disgrace that you have been eating grass and living like a goat!”

The fierce tiger gave the goat-tiger some meat, which he refused at first, but soon got the taste of it. Realising his true nature, he was then terribly ashamed of his weak and cowardly behaviour, and left the herd to be with his own kind.

Before you came here, you didn’t know who you were. Now you will know. It is God who, as the guru, makes one know… “To bleat and run away like a goat is to behave like an ordinary man. Going away with the new tiger is like taking shelter with the guru, who awakens one’s spiritual consciousness, and recognizing him alone as one’s relative. To see one’s face rightly is to know one’s real Self.” [source]

The story reminds me so clearly of the way Sri Chinmoy has taught me to begin learning who I am, and then to increasingly become that person. The guru essentially teaches us how to meditate. Through meditation we learn who we are, and thus how we may go toward the Divine by our fastest route. I sometimes wonder if I am very good at meditating – some days I am certainly not. Despite that, I know even each effort is bringing me a step closer to my true self, and awakening my spirituality. Through work, through creativity and daily inner self-examination, by observing and honing my relations with others, Sri Chinmoy’s teachings have become part of my minute-to-minute life, not just the portion I spend sitting in stillness and silence.

When I was young, I never seemed to fit. Anywhere. Now I realise that was probably God making sure I became reliant on Him, and also showing me the value of the soul’s individuality. Growing up, I was always something of a black sheep. We moved around a lot, so at school I was always the kid with the wrong accent and the out of place appearance. I was skinny, pale and painfully shy, usually alone, taunted and bullied, never invited to parties. Much later my health deteriorated in a way that nobody could understand or explain, which heightened my apprehensions of the world, and my aloneness.

Through the spiritual life I find that perhaps there are no striped goats and no ugly ducklings, but instead only great cats or swans. In the balm of the guru’s encouragement, and the oneness of a spiritual community, the unusual can often take on the light of the rare and precious, rather than the defective and undesirable. By gradually knowing and accepting who I am, and by being around others who are doing the same, I begin to see my natural characteristics and those of others as strengths – as God’s unique creation.

My inner relationship with my guru was always very different from the outer relationship. I was not one of those people with whom Sri Chinmoy spoke often, but two messages came across quite clearly in his outer dealings with me. One was about the significance of writing, and the other was to speak up. I used to raise my voice when he said he could not hear me, but even on the point of shouting he still seemed not to hear, and would ask others around me what I had said. Eventually I realised that outer volume does not betray inner certainty. Inside I was still whispering and trembling with self-consciousness, despite my forte delivery. I was afraid of life and afraid to be who I am, afraid the world would not accept me or love me. Gradually and carefully he was showing me the most important lesson of my life:

Gradually, by letting go of my preconceptions about who I am and who I should be, I find I already have ample capacities. By having more faith in God, bound less and less by fear, I am thus able to use them to serve others and to enjoy life more fully. By being less dependent on the acceptance of others and instead depending more on God, I am freer and happier. I also find, ironically, this self is loved and accepted more by the world.

Although I still have a very long way to go, were it not for Sri Chinmoy I feel I still would not have the faintest idea who I am, or the direction in which to even start my journey. I would neither know my strengths, nor have the courage to grow into them. I would still be bleating and routinely running away…

2 replies on “The Tiger-Striped Goat”

Thanks so much for visiting, Bhashini 🙂 Glad you liked the story, it’s amazing how such simple analogies can stay in the mind, explaining feelings and aiding decisions. I was thinking it’s like a spiritual version of the Aesop’s Fables I used to love when I was small.

Very inspiring indeed! I’ve never heard that story before but it has such a deep resonance. Thank you for your very profound commentary.