Last week I had the good fortune to be involved in breaking a Guinness Record: the world’s longest flower garland. The previous record was 1.6 miles in Tahiti. This was 2.15 miles: an unbroken circle of carnation blooms around Meadow Lake, Flushing Meadow, New York. It took 170 of us to thread the flower heads onto sections of wire, then to drive them around the course, connecting them end to end. It was a joyful and simple task, reminiscent of threading childhood daisy-chains in the long summer grass.

Even when the loop was complete, when I had helped make it with my own hands, and could see it with my own eyes, it was still too much to take in. We drove around the perimeter and caught glimpses of it trailing alongside a cycle path or a patch of reeds. On and on it trailed through the grass, passers-by stopping to crouch and inspect it, following it with their eyes, tracing it with their fingers to check that it was real.

The garland was the dream of Ashrita Furman, who holds more Guinness Records than anyone else in the world. Each year in addition to his other records, he dedicates a particular one to Sri Chinmoy‘s birthday anniversary.

“My friends and I have a tradition to express our gratitude to
Sri Chinmoy as he inspires us to discover inner peace, joy and strength through meditation. On the occasion of Sri Chinmoy’s 80th birthday anniversary we wanted to do something special. The huge garland expresses the deep gratitude we feel. There was an great feeling of oneness and harmony because people from 35 countries were connected by the garland in a circle symbolising planet earth.”

This time the garland was made in several loops at Joseph-Austin-Field, and weighed 4000 lb. After the record was broken, the flowers were made into a little house, as part of decorations for Sri Chinmoy’s birthday, and were also shaped into Sri Chinmoy’s bird drawings. 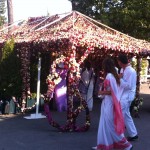 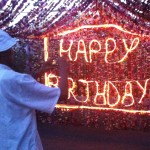